Homily for the funeral of Deacon Jim Hynes: March 1, 2008 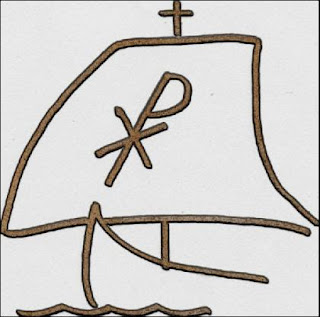 Do not let your hearts be troubled.

I know there are many troubled hearts here this morning. Mine is one of them. I grieve with Kathleen, and James, and Teresa, and all of Jim’s family. All those who loved Jim.

Our hearts are troubled.

But Jim’s wouldn’t be. He understood that in the story of his life, this isn’t an ending. The story goes on. Something better is waiting — for all of us.

And – as Jesus just reminded us – Jim knew the way.

I traveled with Jim a lot – and he did know the way. Part of that is because he had a GPS device in his car. He always knew where he was going.

But with Jim, the most valuable GPS device was his heart. It never steered him wrong. “Where I am going, you know the way,” Jesus said. Yes. Jim knew.

I always thought of him as a gentle giant. I remember seeing him once arriving for a retreat at Douglaston, dragging a massive suitcase. We were only going to be there for two nights, but he had brought what looked like a steamer trunk on wheels. Somebody asked him: what on earth did he bring in such a big suitcase?

He answered, as only Jim could: “My bathrobe.”

Maybe God made him so big to contain that enormous, generous heart. He had a servant’s heart — serving others as a police officer, as a husband and father and in the last months of his life, as a deacon.

It was a heart that remembered. He routinely kept in touch with men who had left the diaconate program for one reason or another – to let them know he cared, and they weren’t forgotten, and they were prayed for. It was one way among many that he sought out the best in others – and gave the best of himself.

Jim’s heart was also one that knew joy.

The laughter of a baby (and Jim loved babies!). The sweetness of a Disney song. The magic of fireworks exploding on a summer night.

I remember those things when I think of Jim and I can’t help but think: Do not let your hearts be troubled. The fact that God gave the world a man like this is something to celebrate.

Jim witnessed it all – great kindness, and great cruelty. He saw the world from behind a police barricade…and from behind a pulpit. Intervening in a domestic dispute…or anointing a newborn baby. He even fulfilled a dream, working in the Empire State Building. Maybe seeing the world from up there served as his orientation for heaven.

Seeing all that he did, he encountered that beautiful, often elusive quality: grace.

He liked to tell the story about how he discovered his vocation. One day several years ago, he saw someone lifting up a poor man on the street, and realized that the stranger offering help was his parish deacon. That moment resonated with Jim.

Because in that moment, Jim saw Christ.

And the beauty of his life was his desire to be Christ for another – to lift up another, and help to bear his burden. He did it for me. And I know he did it for so many others who are here this morning.

Yes, Jim knew the way. And the truth. And the life.

And he knew what mattered. Most people who go to Disney World want to see Mickey Mouse or Donald Duck – the big stars of the Disney galaxy. But Jim was drawn to someone else, one of the tiniest characters, Jiminy Cricket. He even had license plates that said “Jiminy C.” Jiminy Cricket, of course, was the one who helped Pinocchio become a real boy, teaching him to “Always let your conscience be your guide.”

But most memorably, Jiminy Cricket sang about dreams — about wishing upon a star and trusting in things we can’t see.

As the song put it: “Like a bolt out of the blue, fate steps in and sees you through.”

Fate. You could also call it luck, or destiny, or chance. It’s been said that “Chance is the pseudonym God uses when he wants to remain anonymous.”

Maybe the song is really telling us: “Like a bolt out of the blue, God steps in and sees you through.”

That, in a nutshell, was Jim’s theology. His life was a testament to it. And he left us a reminder of how God works in our lives – and how we are to live our lives.

Many of Jim’s classmates today are wearing the stole that we received at our ordination. It carries the image of a fishing boat, headed out to sea. The person who designed it was Jim. Nothing made him prouder than to see everyone wearing that stole on ordination day. That image represents what Jesus told his disciples in Luke’s gospel: put out into the deep. Sail into uncharted seas — guided by faith, trusting in God’s infinite mercy.

That was Jim’s journey. Now, he has finally arrived at that distant shore.

This morning, the image on the stole rests where it belongs, over my heart. And as I look out at my brother deacons — also wearing that image over their hearts — I see Jim’s legacy. This stole is a kind of beautiful and hope-filled homily – the greatest one Jim ever gave. And it’s one that will be retold again and again and again.

It tells us: the sea won’t always be smooth. The destination may not be clear.

But open your sails to the wind. Look above. Trust in the stars. Dare to dream. And: put out into the deep.

Because God steps in and see you through.

“Where I am going, you know the way.”

So: do not let your hearts be troubled!

Are you validly baptized? Married? Better check
archives most recent
More from Beliefnet and our partners
previous posts