The Vatican has just issued some guidelines and a clarifying statement on the sacrament of baptism and its validity that may throw some people into a tizzy — and maybe make a few lose sleep: 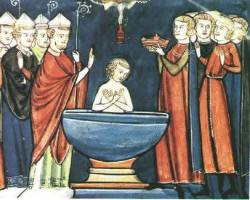 Doctrinal and ecumenical officials at the U.S. Conference of Catholic Bishops said the release of a Vatican statement addressing the validity of baptisms was to answer bishops’ questions and to provide consistency in the church’s practice.

“I think if you are over the age of 45 to 50 you have nothing to fear” regarding the validity of baptisms, said Father Tom Weinandy, a Capuchin Franciscan who is executive director of the U.S. bishops’ Secretariat of Doctrine. Those in the younger generation shouldn’t “have a huge amount of fear” either, he added.

“If you are not validly baptized,” and thus not validly married, “a person needs to get rebaptized and remarried,” explained Father Weinandy.

However, unless a witness at the baptism knows that an incorrect formula was used, “it is assumed they used the right formula,” he said. “The presumption is the obvious truth that the baptism is valid.”

The Vatican’s statement was released “because of the abuse (by priests and Protestant ministers at baptisms) and the questions that have come from it,” said Father Weinandy.

The Vatican “wants to make sure the formula is the proper formula,” he told Catholic News Service Feb. 29.

Instances in which a baptism has been considered invalid have been “very, very, very few and far between,” he said.

Check the link to see if you think you might be one of those “few and far between.”