Some rumors just won’t die. One of the most persistent ones floating around the blogosphere, and even in the mainstream press, is that a leading candidate for president is a Muslim. 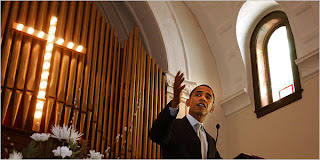 Deb Geissler of Tuscaloosa, Alabama, is working the phone bank for Barack Obama headquarters in her home state, when she reaches a man who bristles at the mention of her candidate’s name.

Geissler recounts this story to me on an unseasonably cold, gloomy Friday in Aiken, South Carolina. It’s the day before the South Carolina Democratic primary, and Geissler—a middle-aged nurse with piercing blue-grey eyes—is fresh off a six-hour car trip from Tuscaloosa. She is driving around a low-income black neighborhood of Aiken in her silver Honda Civic hybrid, along with three students from the University of Alabama: Ruthie Puckett, Crystal Murray and Jarvis Edwards. Like Geissler, they’ve come to help any way they can in the hours before Obama’s most important primary yet.

On streets like McCormick, Dillon and Toole, the houses sit close together. Many feature wooden front porches, held up by cinder blocks, and cars, as often as not, sit parked on the lawn. The four volunteers take turns hopping out of the Civic with a list of addresses where they have permission to place Obama door hangers. Together, they make up a diverse quartet, representing in miniature their candidate’s broad appeal. They are black and white, younger and older, and even American and Canadian—Geissler is a native of Nova Scotia.

In her almost stereotypically polite, North-of-the-border accent, Deb Geissler expresses her faith in Barack Obama. And she explains that in her eleven years in Alabama, she’s seen how much nastier America’s politics can be than their Canadian equivalent. For her, there is no clearer example than when she spoke with that man back in Tuscaloosa, wondering how he got his information or, frankly, why it would even matter.

Nobody is exactly sure where the rumor came from. Newsweek, which not long ago published an article about unsubstantiated accusations against Obama (all of which the magazine found to be maliciously false), wagered that the alleged link between Islam and the Illinois senator has been circulating in emails since January 2007 or earlier. But discredited or not, the whispers continue, and seem to be shaping votes, and not only in the Southern Bible Belt. On NPR last week, a reporter on the other side of the country interviewed a California handyman for a story about the popularity of Hillary Clinton among Hispanics in that state. The man sounded more frightened by Obama than in favor of the former First Lady.

“I don’t know, man,” he said. “I mean, we’re fighting over there in the Muslim world and we got a candidate that’s Muslim. That trips me out.”

You can read right here what the campaign is doing about the situation, what Obama himself has had to say about his faith.

And the New York Times last year had a compelling piece about Obama’s religion, as well.