Meditation May Help You Avoid the Flu This Winter

The advantages of meditating and exercising simply continue to pile up. Both are known to decrease people’s stress levels, but it is now looking like they could be people’s backup flu shot. A recent study by University of Wisconsin-Madison found that either regular exercise or meditation could help reduce a person’s chance of contracting the flu or getting a cold.

The study had three groups of 130 adults. The first group took an eight week meditation class. The second group took an eight week exercise class. The third group was the control group and did nothing. All of the participants received a flu shot, and their health was tracked throughout the winter. By the time spring arrived, the control group had caught a total of 134 respiratory infections that had cost them a combined total of 105 days of work.  The exercise group did a little better with 120 respiratory infections and 82 days of lost work. The meditation group did the best of all with 112 respiratory infections and a combined total of 73 missed days of work.

A single study is not conclusive, but the results do suggest that either exercising regularly or meditating daily can help reduce the number of illnesses a person contracts. This is especially important during flu season as influenza is believed to be responsible for nearly 17 million lost work days every year leading the flu to cost America over $7 billion a year in sick days alone.

“More research into the benefits of exercise and meditation is warranted, maybe in higher-risk or sicker populations, where there are more health benefits to gain,” said Bruce Barrett. Barrett headed the research and helped author the study. “Until that research is done, we feel justified in advocating for both mindfulness and exercise because benefits appear likely, and there are minimal risks.”

Even if exercise and meditation fail to replace the flu shot, there are still many benefits to making them a part of your life. Meditation has been linked to better sleep and lower stress while exercise has been shown to reduce the risk of serious conditions such as heart attacks. Making a habit of meditating and exercising more often are both common goals for a variety of reasons. The fact that they might help people avoid catching the nasty old flu is just another reason both of them deserve to be a part of everyone’s daily lives. 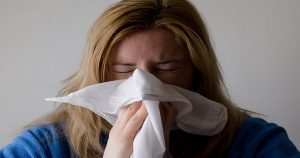