Why I Hated the Movie “Courageous” 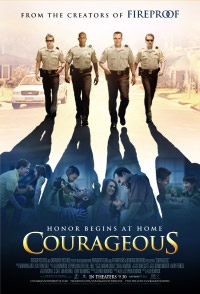 On Friday night, I went to see the premiere of Courageous, the new movie from Christian filmmakers Alex & Stephen Kendrick (the team behind Facing the Giants and Fireproof). I hadn’t seen either of those films, and am not generally interested in purely faith-based films, for reasons of quality and for reasons of not wanting to be preached at. But I went to see Courageous. Why? Two reasons:

1. It’s about fatherhood, and I’m kind of interested in that. 🙂

2. Our date-night friends suggested it and we like hanging out with them.

A quick review: Courageous is too long by about 30 minutes and too preachy by whatever amount you can quantify preachiness. It started and ended with two intense, well-shot and -staged action sequences. Good edge-of-your-seat stuff. In the lengthy middle, it had a couple of moments that were funny enough to have the whole audience laughing. These comedic set pieces were clearly there to balance out a very serious story line, and often occurred (a bit ham-handedly) right after the really sad, emotional parts. But there were too many weird subplots, too many easy resolutions of complex problems, and there was far too much emotional manipulation. Because despite the uplifting you-need-to-be-a-selfless dad message — which I can totally support — this was a sad, sad movie. Regardless of your gender, it was a total weeper.

It’s handled tastefully and occurs off-screen, but a child dies in this movie. A main character. It is heart-wrenching. Look, something distinct happened in me when I became a dad — it was like a switch turned on — and suddenly I had a very real and intense aversion to small children experiencing discomfort or danger, whether real or implied. I can’t handle it. I don’t want to see it. I don’t want to think about it. I go to movies to escape and enjoy myself and there is no happy resolution on earth that can offset my dislike of a film in which bad things happen to children and we are forced to experience its effect on their parents. I hated Courageous for that reason, because it killed off a child and force us to wallow in the resulting grief.

There have to be ways to convince us not to be bad fathers without subjecting us to that.

Last week, Rod Dreher wrote a blog post called “The Conservatism of Parenting” about how having children twelve years ago had caused “a sharp and unexpected change” in his film-watching habits. A former professional film critic, he suddenly was unable to watch violence or sexually explicit material on-screen:

This was something very new. I was an observant Catholic and a conservative in every sense prior to the baby’s coming, but I was able to hold film violence at an ironic distance. Suddenly, I felt it in my bones in a way I had never done. Why? I think it was the simple fatherly act of holding my newborn son close every day, and experiencing how unbelievably fragile human life is. Watching its wanton violation, seeing the terrible abuse of the human body and the graphic murder of human beings, was literally intolerable to me. It wasn’t that I became indignant about it; it was that I literally could not watch it.

I totally get what he’s saying. I’ve never been a big fan of violent or sexually explicit movies to begin with, so that wasn’t a big change. My change was suddenly experiencing an extreme amount of discomfort in watching something traumatic happen to a helpless child. Even the suggestion of it in a movie or TV show sets me on edge. I can tell myself “It’s just a movie” all day long, but that stuff sticks with me in a way that nothing else does. I don’t want to see a family grieve their child’s death in the same way I don’t want to see explicit violence. Because it sickens me.

Which is to say, I can’t recommend Courageous. Yes, it’s decently made, if manipulative and melodramatic. Yes, it’s got a positive and timely message, but it ends in an altar call. Literally. It has too much going on, too much stilted dialogue, and for all its emphasis on the duty of fathers (good!), it practically ignores mothers (weird).

Dads, your kids need you to be present in their lives. You only have them for a short while, so if your daughter asks you to dance with her, you need to do it. If your son wants you to go run with him, you learn to love running. Find a way to spend time with your kids because they rely on you more than you know. Don’t be selfish. Don’t work so much. Don’t ignore them. And above all, don’t underestimate the influence — positive or negative — of a father.

If you’ve seen the film, do you agree or disagree with me? Am I off-base on this?