Raised Right: An Interview with Mike and Alisa Harris 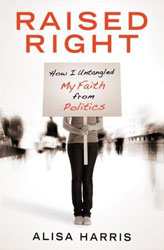 Alisa Harris’ debut book, Raised Right: How I Untangled My Faith from Politics was one of the most compelling I’ve read this year. She’s a young journalist living in New York City but grew up in Middle America. Her parents were conservative Republican activists whose politics were formed and influenced by a devout faith. Taught by her parents, Alisa spent her childhood and teen years picketing abortion clinics, working Republican phone banks, and debating conservative principles in speech competitions with fellow home-schoolers. She was hard-core, working hard to live out the faith and politics passed on to her by her parents.

Then Alisa left home for college, at which time the faith that fueled her conservatism began to expand, opening her eyes to more progressive policies. Not in spite of her religious beliefs but because of them, politics became a lot more complex, and suddenly she found herself moving toward the opposite side of the political spectrum — but still fully rooted in her family’s Christianity.

Raised Right explores those tricky issues of family, faith, and politics. I read an advance copy, and was happy to give the book this endorsement:

“In Raised Right, Alisa Harris paints a fascinating picture of how the same religious devotion can send succeeding generations to opposite sides of the political battlefield. And while her story may be more common than ever, it’s uncommonly told. Alisa’s voice is fresh, honest, gracious, and provocative in all the right places. An enthralling and illuminating read.”

So instead of reviewing the book, I thought I’d take advantage of this blog’s fatherhood focus to interview both Alisa and her dad, Michael Harris, about how her family reacted to such a personal book. I asked them matching questions via email. They answered independently of each other.

Alisa, how much did you tell your parents about the idea/direction of the book as you were writing it?
Alisa: I didn’t tell my parents much at all. They knew the general idea of the book but they didn’t see anything ahead of time. I think I gave them one chapter to read before I had a finished manuscript. That was when I finally let them read it.

Mike, how much did you know about the idea/direction of Alisa’s book as she was writing it?
Mike: Over the years, Alisa had talked to her mom and me about different subjects she was considering for a book, so I wasn’t sure what direction she was taking. She told us it was a book of her political memoirs shortly before she started to write Raised Right. After she started it, she would occasionally call and ask me to clarify facts concerning timelines or past events. I didn’t know which events and facts would appear in the book, although I speculated about how the different information would fit into the book and sometimes fretted about it.

Alisa, were you nervous to let your parents finally read it? Why?
Alisa: Yes, I was nervous! I knew going into it that I was telling not just my story but the stories of people connected to me. It’s a big responsibility and a challenge to tell their stories fairly and honestly. Part of my purpose in writing it was to explain myself and my changes to my parents, so having them read it was a test of whether I succeeded.

Mike, when you first had the opportunity to read the book, were you nervous? Why?
Mike: “Nervous” would be putting it mildly. I experienced a gamut of emotions ranging from excitement for Alisa’s accomplishment to an unsettled anxiety over how she might describe her upbringing and the beliefs that are dear to my wife and me. Even though Alisa and I always had good communication with each other, and I was transparent about my life, I knew she could not fully understand me nor could I fully understand her, particularly as she grew into adulthood.

Alisa, what did you think would be the biggest surprise or revelation your parents had about you upon reading the book?
Alisa: I don’t think there are any huge surprises, but my mom did say that she was surprised to learn everything that was going on in my head when I was young. I was a quiet person so I had a lot of angst and fervor that I probably didn’t express.

Mike, were there any big surprises or revelations about Alisa that you encountered upon reading the book?
Mike: I had two significant revelations as I read the book. The first revelation was that, although her views have changed, she has held to the values in which she was raised. Perhaps this revelation would have been less significant had I not agonized over how far I thought her political opinions had departed from my wife’s and mine. My tendency was to think that liberal positions and Christian values were mutually exclusive; you couldn’t hold to one without abandoning the other. After reading her book I am reexamining that position. The second revelation saddened me somewhat. In some cases, particularly her younger years, I feel like she bore casual comments and common occurrences more intensely than intended. I had this same inclination growing up and didn’t realize she shared it with me; perhaps this heightened sense of responsibility is a burden most firstborn children bear. Even though her younger siblings participated in political campaigns, heard conservative talk radio, and wore “home school jumpers,” they didn’t view these experiences in the same way and didn’t usually take these matters to heart as deeply as she did.

Alisa, what was the hardest part to write, knowing your parents would be reading it?
Alisa: I think the chapter on abortion was the hardest. It’s a sensitive, difficult issue and my opinions on it are far from settled. I wanted to treat it with honesty and depth but also sensitivity toward my family’s experience with it. I actually called up my mom and talked to her about it while I was writing that chapter.

Mike, what was the hardest part for you to read?
Mike: I think it was Alisa’s apt description of me in the throes of my alcoholism. While reading it, it was almost as if I had forgotten who I was then. I am grateful that the God who cares delivered me from that darkness and brought me into the kingdom of His Son.

Alisa, what are the best qualities you think you’ve inherited from your dad?
Alisa: My dad has never been the kind of person who judges people or turns away from them because of the way they act or what they believe. I’ve seen a lot of Christians batter people with their beliefs, and neither of my parents do that. They’ve changed their minds on a lot of things over the years, especially regarding how they raised us. I appreciated that they were always open to listening to me. That’s something I aspire to–now and when I have my own kids.

Mike, which of Alisa’s qualities and characteristics make you proudest?
Mike: I have a deep respect for Alisa because of the way she has responded to adversity in her life. For her young age, she has been through the furnace of affliction and I think she has come out as gold. Her response to the trials in her life has been to grow in humility, become more teachable, and extend grace to others. For those that don’t know her well, I believe her book provides solid evidence of those traits. I am also proud that she thinks deeply, researches diligently, and communicates artfully. She always practices integrity and honesty in her writing. Having said that though, I want to caution readers not to believe everything she said about me.

Another quality I enjoy is her humor. I like the way she uses it to laugh at herself and the world around her. In fact, her humor holds nothing in reverence that ought not to be held in reverence, meaning almost everything.

Alisa, is there a specific lesson or take-away you hoped your parents might learn from reading your book?
Alisa: I think I would like them to know that I changed my beliefs because of principles that they taught me, like justice and care for the defenseless. I hope that they can see that my rejection of their politics is not a rejection of my faith.

Mike, what specific lesson or take-away have you learned from reading Alisa’s book?
Mike: The main lesson I have taken away from the book was affirmed, rather than learned. It imparts the lesson to listen deeply to those we love; not to listen so we can respond, but to listen so we can understand.

Alisa, has this process brought the two of you closer together?
Alisa: We were always close and still are. But our political discussions were somewhat fraught and involved a lot of loud argumentation or (in the case of my 2008 vote for Obama) some studied avoidance of talking about it at all. I think we can communicate about politics more easily now.

Mike, has this process brought you closer together from your perspective?
Mike: I think we are closer because of the process. When she was a junior in college and considering topics for her honor’s thesis, I suggested she examine the role of women in the church because of criticism she was receiving from people who were important in her life. I had been examining the subject and found my views changing as I studied the issue from a biblical perspective. Subsequently, we were called before our church’s elders because of her behavior and our parental neglect for failing to correct that behavior. We shared a painful journey together, leaving a church and people that we loved, who took a path leading toward a rigid patriarchy. I think it was a journey that strengthened our bonds and brought us closer together. Those bonds transcend any political differences we may have.

At the same time, there were other dynamics at play that changed our relationship. Alisa met and later married David. As their relationship developed and deepened, my relationship with her changed, too. Of course that is the way it should work. In the book’s acknowledgements, Alisa wrote about her love for David and how important he is to her. I was moved by those words and am thrilled that they get to share their lives together.

Alisa and Mike, thanks so much for the interview! If you’re interested at all in faith, politics, and parenting — regardless of whether you’re conservative, progressive, or somewhere in-between — Raised Right is an excellent, thought-provoking book.