I’m Too Pretty to Blog About This 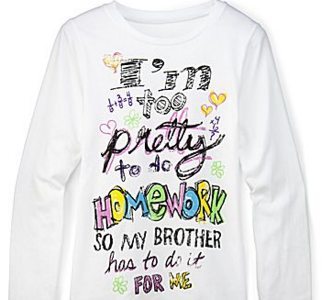 So this week the Web has been abuzz about a t-shirt design that was, until today, available at J.C. Penney. It’s a white long-sleeve shirt with a graphic that says “I’m too pretty to do homework so my brother has to do it for me.”

They made this statement:

J.C. Penney is committed to being America’s destination for great style and great value for the whole family. We agree that the ‘Too pretty’ t-shirt does not deliver an appropriate message, and we have immediately discontinued its sale.  Our merchandise is intended to appeal to a broad customer base, not to offend them. We would like to apologize to our customers and are taking action to ensure that we continue to uphold the integrity of our merchandise that they have come to expect.

As the parent of a very pretty and smart daughter, I have thoughts:

1. Of course the shirt is stupid and offensive. It reinforces gender stereotypes that we’re trying to teach our daughter are absolutely untrue. It’s a negative message that gets in the way of the positive messages we’re trying to give our daughter — that she would make a great doctor or writer or geologist (she loves rocks). She’s not even at the stage yet where she dislikes homework, because she’s good at it and she enjoys the challenge. Graphic t-shirts are designed to send a message, and if we think it’s a bad message we have every right to complain.

2. We have to pick our battles. There are probably a million different offensive t-shirts on the Internet. All you have to do is Google “graphic tees” and you’ll find something that offends you on the grounds of religion, morality, stereotypes, acceptable language, and quality design. Sometimes all of those at once. You can’t start online petitions for every online retailer that makes a dumb shirt, because they have every right to practice their commerce if they do it within the law. Some people really like offensive t-shirts. But occasionally it’s helpful to fight a big, newsworthy battle — and taking on J.C. Penney instead of, say, Busted Tees is pretty smart. Why? Because it makes news and it gets people involved.

3. Not everyone is the petition-starting type. Had I seen that shirt at J.C. Penney, I probably wouldn’t have complained about it online. I doubt I would have complained at any level — to the corporate office, the store manager, anywhere. Because they have the right to market and sell whatever they want to market and sell (see above). However, had I seen it in the presence of my daughter, we definitely would have had a discussion about why I thought that was a dumb and offensive shirt. We would have talked about stereotypes and I would have explained why I disagreed with it, why I hoped she disagreed with it, and why I wouldn’t have wanted her to wear it. Oddly, that’s a teachable moment we might not have had (theoretically) if not for the existence of stupid shirts.

4. I wish we got as upset about injustice as we do about bad fashion messaging. File this under “first-world problems.” We’re upset that our daughters are receiving a negative message about their intelligence and ambition from a retailer. But we hardly bat an eye at the idea that many retailers may be exploiting and concealing sweatshop labor — mostly women — to make their clothing in the first place. If we were truly worried about the rights and unmet potential of women around the world, we’d make who makes the shirt a far bigger issue than what’s on the shirt.

That’s where I stand. What do you think?