I’m sure many of you have had the experience of someone accosting you and announcing,

“The Lord told me to tell you that you’re WRONG in this area, and you need to change your life in the following ways . . .”

And then they proceed to instruct you on how to raise your children, or what Bible study you’re supposed to be attending, or the command (from God, who for some reason couldn’t get through directly to you) that you take over a particular ministry that has been languishing for lack of just the right leader (You! Didn’t know that, did you?).

When you make the mild observation that, if this issue is so important, God would surely impress it upon you in a less invasive manner, the response looks like,

“It’s because you don’t listen! And I do — I am a prayer warrior, and God speaks to me directly.”

Does God speak, directly and with an audible voice, to other people, and not to you or me?

In reading assorted pop culture Christian books, or listening to the multiplicity of TV evangelists, prophets, apostles, and seers, one could easily get this impression, as conversations with God and the celebrity or writer in question are bandied about as if they were normal:

“God told me the other day — with a little chuckle, you understand, because He was amused — that . . .”

It would be so easy, we sigh, if God would speak to us that way, or at least leave little Post-It notes around with specific instructions, and because He doesn’t — but He appears to do so with others — we walk our path with heads hanging, convinced that we are a lesser child of the Kingdom, unable to be trusted with the simplest tasks.

But the operating phrase in this concept is “appears to do so with others,” with rudimentary commonsense telling us that, just because someone says God talks directly to them, does not mean that this is so. And considering that there is a 2,000-page book with assorted writings inspired and directed by God, a bit more commonsense tells us to get familiar with what’s in there, first, before we go chasing after the words of someone who purports to speak new words from God, fresh for the issues of today.

“But God spoke to the prophets directly! Look at Elijah!”

The Prophets of Old

Okay, let’s look at Elijah — 1 Kings 19 finds us at Mount Horeb, where the prophet fled after a pretty impressive showdown between the priests of Baal and the God that the Israelites were supposed to be following (Chapter 18). Discouraged by the disbelief, lack of belief, and weakness of belief of his countrymen, Elijah cries out to God,

“The Israelites have rejected your covenant, broken down your altars, and put your prophets to death with the sword. I am the only one left, and now they are trying to kill me too.” (Please note that Elijah, whom history and tradition acknowledge as a true prophet of God, did not enjoy the fruits of the prosperity gospel. Nor did he preach it.)

We are then told that a great and powerful wind tore through — but the Lord was not in that wind. Neither was He in the earthquake, or the subsequent fire. His voice was in a gentle whisper —

But was this whisper audible?

The Bible is filled with accounts of prophets — from Moses to Isaiah, from Elisha to John the Baptist — who said and did miraculous things, and sometimes we are told that they encountered God in a dream, or a vision. Other times, we are told that angels approached them (the most notable of these are the Gospel accounts after Christ’s resurrection).

But often, the most information we are given is that, “God spoke to . . .” with no specific details on just how God spoke. It is easy to insist that all of these encounters were audible, and if it happened to them, it can happen to us (or those limited elite — not you or me, obviously — who are truly “enlightened”) also.

And therein we are easily fooled by smooth, confident voices whose central message is that they hear God’s words and we do not, and it is their ministry to pass on those words to us. But it is our job, as did the Bereans in Acts 17, to review everything we are taught by anyone who proclaims to be a teacher, determining whether it is in line with the information we are given in Scripture.

Thank you for joining me at Commonsense Christianity, where my constant encouragement to believers is to seek out God directly, as opposed to going through the never-ending supply of middlemen who are willing to do this for us — for a price, that is.

Fat Cat Christians: Why Do We Keep Feeding Them? 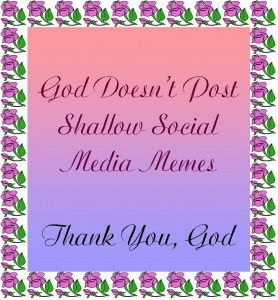 Does Jesus Get Mad When We Complain?
archives most recent
More from Beliefnet and our partners
previous posts