When You’re Not as Happy as You Wish You Were

It’s not wrong, unusual, or evil to want to be happy. If it weren’t such a basic human drive, the pursuit of it wouldn’t have been mentioned as an inalienable right in the U.S. Declaration of Independence.

And yes, my Christian friends, I do know that the Declaration of Independence and the Bible are two different publications, and the latter doesn’t specifically mention the pursuit of happiness.

Indeed, if you listened to what some Christians propound, you’d be convinced that the Bible limits itself to discussion on damnation, obedience to authority, and the appalling lack of its readers’ faith. Sometimes I marvel that I ever managed to become a Christian at all.

But we were talking about happiness, which, admittedly, is a difficult thing to attain in a world that does everything to oppose it: loss, separation, anxiety, illness, financial ruin, fear, oppression — this is the norm in which we live, so it’s no wonder that we frequently don’t feel as happy as we could wish.

You Can Freely Ask God for Happiness

But happiness, true happiness, is composed of peace, joy, and contentment, three words that are frequently mentioned in the Bible, and three attributes that we can unapologetically seek from God. Like most things we ask for from God, however, what we eventually get will look different from what we initially want, because His ways really are at variance with, and higher than, ours, and the gifts He gives thereby richer, and deeper than what we expect or can understand.

“Peace I leave with you; my peace I give you. I do not give to you as the world gives. Do not let your hearts be troubled and do not be afraid,” Jesus tells his disciples (including us) in John 14: 27.

From this passage, we derive two major points:

1) Christ’s peace does not look like the “Peace on earth” message emblazoned across reader boards during the Christmas holidays. In so far as discussing an absence of war, that’s not something we’re going to see on earth before Christ returns, especially as many of the mega-businesses and governments calling for it have no actual desire to see it happen. Profits would go down.

Christ’s peace is inner, and individually experienced. Ultimately, it brings to us respite from fear and anxiety.

2) Christ’s peace is a gift, which means that it is not something we can generate ourselves. Peace, faith, contentment, joy — all of these gifts are just that — gifts, and the only one who can give them to us is the Giver.

We can’t create them, manufacture them, or assemble them with or without instructions, but too many Christians go through their entire lives lamenting their lack of faith, peace, contentment, and joy, convinced that they can’t even attract God’s interest unless they have control over these issues.

Even when you explain that these are gifts, insecure Christians insist that they’re not good enough to receive them, and that’s why God is holding back. But if our very salvation was given to us before we deserved it, what makes the rest of the journey any different?

“You have been saved, through faith — and this not from yourselves, it is the gift of God — not by works, so that no one can boast,” Paul tells us in Ephesians 2: 8 (by the way, did you notice that the faith doesn’t generate from us?)

Getting What We Deserve?

Within Christian circles, we are quick to note, and remind, that we — and all those nasty pagan reprobates out there — are slimy, creepy, reptilian lizards who deserve the very worst that God can throw at us, but “He is patient . . . not wanting anyone to perish, but everyone to come to repentance.” (2 Peter 3: 9)

If we don’t get the punishment we deserve because God extends His hand of grace to us, then why, after we have grabbed onto that hand, do we expect that we have to please God before He will help us?

If you are unhappy, my friend, the first place you can start is by not vilifying yourself for not being happy enough. While we can grow in contentment by learning to be more thankful than covetous, sometimes life hurts just too much. You would be inhuman if you were not reeling from some of its blows.

Take your bruised and wounded spirit and lay it in God’s hands. His grasp is firm enough to keep your soul from dropping onto the ground, yet gentle enough to not maul, or contuse. Think of a wounded songbird, and how carefully you would cradle it.

Thank you for joining me at Commonsense Christianity. I have been a Christian for 32 years, spending nearly two-thirds of that time in a complacent fog that enabled me to live each day without really talking to God, listening to God, or believing that He had any impact or interest in my life.

But life intervenes, and pain and fear drove me into the arms that God was always holding out. As I picked up the Bible, and read it for myself without the interpretation and direction from others, I grew closer and closer to God. He was always there, sitting on the sofa right beside me, but I had been facing the other direction. Now, I throw myself in His arms and know that He will catch me. Sometimes I hear His laugh of joy, the same laugh I experience with the family members I adore.

I write to encourage others to aggressively and pertinaciously seek God, because He is very, very willing — and worth — being found.

(As an aside, all of the fine artwork in my articles is by my Norwegian Artist, Steve Henderson, who seeks to capture beauty, truth, peace, and joy in paint. No, he does not paint “Christian Art.” He is a Christian who paints art.) 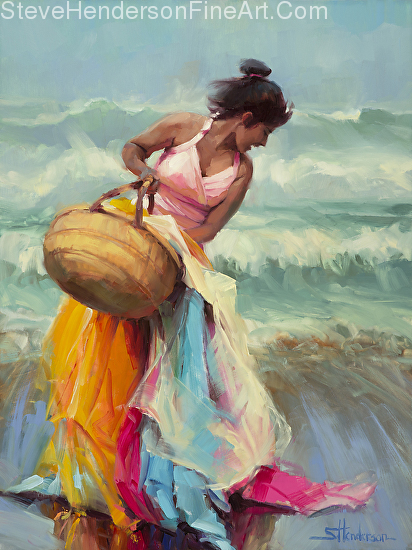 Money, Power, Fame, and Name
archives most recent
More from Beliefnet and our partners
previous posts