We were building sandcastles at the beach — the Norwegian Artist, Tired of Being Youngest, Small Person, and I — when an argument arose about the green and red plastic seahorse molds. Other than the colors, they were identical, but to Small Person — who is four years old — the colors mattered very much indeed.

“I want the red seahorse,” she announced to Tired of Being Youngest, 13 years her senior. “You take the green one.”

No doubt it was the bossy tone that prompted TBY to reply, “No, I’m taking the red one.”

Back and forth, niece and aunt, until I intervened. It brought back memories — not all memories are fond ones, you know — of sibling rivalry.

“You are the adult on the beach,” I told TBY. “and you really don’t care about the color of the seahorse. Give in.”

Smiling ruefully, she handed over the horse with grace and aplomb. “It’s just that she’s acting like such a four year old.”

All Adults Have Been 4-Year-Olds

I understand. All adults on the planet, at some point, have been four year olds, and while we’ve pretty much advanced past the challenges of the age, now and then the inner child in us stomps our foot, sets our chin, and announces that We Want the Red Horse. Most of the time, however, we act like grown-ups, and while we don’t allow the four-year-olds in our lives to stomp all over us, we do — with grace and aplomb — give in to some of their demands simply because we’re the adults and they’re not, and whatever they’re demanding really isn’t worth fighting over.

So it is within the realm of Christianity, and all of us who are Christians have been, and acted, like four-year-olds in our early, immature days. The mature believers around us — while they didn’t let us stomp all over them — smiled graciously and gave in when it didn’t really matter, knowing that they could do more damage by insensitively ignoring what was important to us.

Ideally, We Grow up

As we grow and learn about Christ, many of us leave the four year old behind, but within the Christian community, there are some who stop at that age, and like Small Person, they can be quite vociferous about their opinions. While it is tempting to lash out at these people harshly, this is not how the mature Christian responds. The apostle Paul, in Romans 14, discusses the four-year-old Christians within our midst:

“Accept him whose faith is weak, without passing judgment on disputable matters.”

These disputable matters include what we do, or do not, eat or drink; what holidays we do or do not celebrate and how; how we dress. Extrapolating this to modern day, we can add what we read, which movies (if any) we enjoy, whether or not we think it’s okay to wear make-up, color our hair, play cards, meet with friends in a bar, or allow our 12-year-old daughter to shave her legs.

And while the human nature within us responds to the bossy (read: legalistic) tone by provoking the person demanding the red horse, this really isn’t right:

In every family, there are all ages of people, from infants, to four-year-olds, to teenagers, to young adults, the middle aged, the well seasoned — and we can all learn and benefit from one another. I’ll be the first to admit that, though as an adult I have more to teach Small Person than she has to teach me — I’d be a fool if I didn’t realize that she does, indeed, have something to say.

And what sort of adult would wheel around on that child, snatch the red seahorse from her hands, and snarl, “Shut up! It’s just a stupid, plastic, TOY!”

Or maybe Paul says it better:

“Accept one another, then, just as Christ accepted you, in order to bring praise to God.” (Romans 15:7). 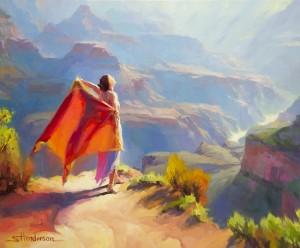