a union or an intersection? pick one 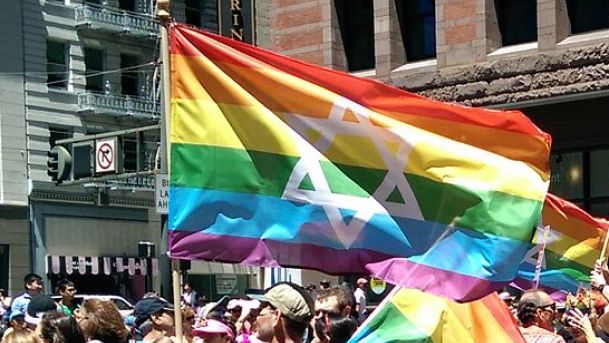 An incident at the “Dyke’s March” in Chicago exposed a fundamental flaw in the doctrine of intersectionality that animates the political Left:

The Chicago-based LGBTQ newspaper Windy City Times quoted a Dyke March collective member as saying the rainbow flag with the Star of David in the middle “made people feel unsafe,” and that the march was “pro-Palestinian” and “anti-Zionist.”

The Chicago Dyke March is billed as an “anti-racist, anti-violent, volunteer-led, grassroots mobilization and celebration of dyke, queer, bisexual, and transgender resilience,” according to its Twitter account.

Laurel Grauer, a member of the Jewish LGBTQ organization A Wider Bridge, told the Windy City Times “it was a flag from my congregation which celebrates my queer, Jewish identity which I have done for over a decade marching in the Dyke March with the same flag.”

“They were telling me to leave because my flag was a trigger to people that they found offensive,” she added.

Another participant asked to leave because of a Jewish flag was Eleanor Shoshany-Anderson. “The Dyke March is supposed to be intersectional. I don’t know why my identity is excluded from that. I felt that, as a Jew, I am not welcome here,” she told the Windy City Times.

This is a nutshell is the central flaw in the doctrine of intersectionality; you can’t validate everyone’s victimhood simultaneously. At some point, there is an implicit hierarchy of victims. This is a natural outcome of trying to delineate victimhood using identity politics rather than universal values. A robust justice seeking movement would understand that Palestinians are oppressed, that Jewish LGBT people are oppressed, and that the inclusion of the Star of David on an LGBT rainbow flag is a challenge to the orthodoxy of the religious establishment in Israel which also serves to advance the cause of Palestinian political aspirations, by challenging that establishment’s assertions and creating a space for dissenting views to gain a foothold. But by only seeing the Star of David as a symbol of the Israeli Establishment, and refusing to acknowledge that here it is used by LGBT Israelis in a subversive sense, both causes are diminished. This is because identity trumps justice. A better framework than intersectionality is simply liberty, where identity is not important,but the fact that LGBT people and Palestinians both share a common goal of asserting their right to be who they are – ethnically, religiously, sexually. It doesn’t matter what the identity is, it just matters that there be no authoritarian dictating that said identity is thoughtcrime. But I don’t see how that enlightened perspective that is liberty-centric can flourish when identity itself, rather than the freedom of identity, is treated as the sacrosanct ideal.

Personal liberty is more than just identity – it is about thought, and action. What matters is not just who you are, but what you do. Oppression can never erase who you are, it can only constrain how you express yourself. Therefore, identity itself does not need to be defended so jealously – it is beyond the reach of the oppressor.