Ashara: Why do we mourn? 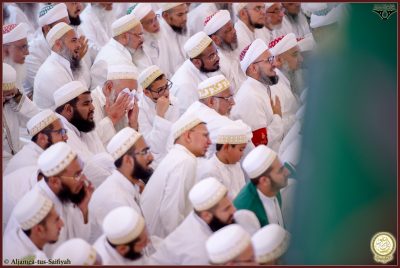 The year 1438 is upon us, and I am in Dar es Salaam, Tanzania to attend the annual Ashara Mubaraka sermons of his Holiness, Syedna Mufaddal Saifuddin TUS, commemorating the martyrdom of Imam Husain at Karbala.

We mourn Imam Husain’s AS sacrifice on behalf of Islam, not as Shi’a, but as Muslims. Husain AS made an unthinkable sacrifice to defy the defilement of Islam by the tyrant Yazid LA, whose depraved reign as Caliph would have destroyed Islam from within. The grief we express during Ashara is not just out of our mohabbat (love) for the Prophet and his Ahlul Bayt (household), but also for the necessity of his sacrifice.

Ashara is not just for Shia or just for Muslims. Like all fulcrum points in history, Ashara belongs to all of mankind. The incomprehensible contrast of divine guidance versus human fallibility, of mankind’s inherent nobility versus mankind’s learned cruelty, comes alive in the story of Karbala with a universal relevance. Ashara transcends time and space, such that wherever a people strive against tyranny, whenever a hero sacrifices himself and all he/she holds precious for the sake of something greater than himself/herself, that place is Karbala and that day is Ashura.

“The principles of Hussains’ revolution became an approach to every rebel who want to take his rights from his oppressors.” — Victor Hugo

Mourning is amplified when mourners assemble. In every jamaat (congregation) around the world, mourners gather to remember Husain AS. Individually, we are like fragments of a stone inscription, shattered by the cynicism, temptations, and distractions of the material plane. Gathering together in remembrance of Husain AS reunites us, nourishes and heals our faith, and allows the message of Islam that was defended at Karbala to be read once more upon our souls. The act of gathering together bears living witness to the ultimate victory of Husain AS, who died for Islam in the most literal sense. We, his mumineen (faithful), will not allow his sacrifice to be in vain.

“If Husain had fought to quench his worldly desires…then I do not understand why his sister, wife, and children accompanied him. It stands to reason therefore, that he sacrificed purely for Islam.” — Charles Dickens

We mourn because we love. The stronger the love, the greater the mourning; the indifferent do not mourn. Love is the basis of our humanity; the very word insaan (human) is the root of the word anasat (intimacy) in Arabic. When anasat is betrayed, the human soul never fully recovers. The truer the love, the deeper the wound. Imagine, then, the wound upon insaniat (humanity) itself, when the truest love of all, that of the divine, was betrayed at Karbala? The violent irony of humanity’s own capacity for inhumanity is truly heart-breaking.

Related: My last visit to East Africa was also for Ashara, in Mombasa in 2008. Also, see TheDawoodiBohras.com for a comprehensive overview of the Ashara Mubaraka event. Elsewhere, Aamer Jamali draws an analogy between the Holocaust and Karbala for emotional significance. Finally, a deeply personal reflection on Ashara’s symbolism by Durriya Badani.

Mr. Gingrich, I believe in Shari'a #MuslimGo
archives most recent
More from Beliefnet and our partners
previous posts