“Her antiquity in preceding and surviving succeeding tellurian generations: her nocturnal predominance: her satellitic dependence: her luminary reflection: her constancy under all her phases, rising and setting by her appointed times, waxing and waning: the forced invariability of her aspect: her indeterminate response to inaffirmative interrogation: her potency over effluent and refluent waters: her power to enamour, to mortify, to invest with beauty, to render insane, to incite to and aid delinquency: the tranquil inscrutability of her visage: the terribility of her isolated dominant resplendent propinquity: her omens of tempest and of calm: the stimulation of her light, her motion and her presence: the admonition of her craters, her arid seas, her silence: her splendour, when visible: her attraction, when invisible.” — James Joyce, Ulysses

By design, Ramadan moons are meant to illuminate truth. Spiritual understanding in this month arrives independent of where you started, where you ended, or even based on the quantity and quality of worship engaged.

In Ramadan, especially towards the end, you always find that you learn something, land somewhere, pinpoint something solid to hold onto and hope for. Yet, the atmospheric quality of Ramadan that brings us to these truths differs, summoning us every time to seek out some new process to “find Ramadan”. Sometimes, Ramadan feels fast – the days and nights move at a breakneck pace, leading discovery to be similarly efficient and swift. Sometimes Ramadan is lenient – halcyon days and tranquil nights uplift and revive at a downtempo pace like an elegant song that steadily trails into its crescendo.

This Ramadan didn’t follow any recognizable pattern. The month was flooded with a deluge of disruptive information and irreconcilable experiences. With 29 days gone by, the poetic slowness of what it means to fast (to abstain from elemental needs, abstain from food, abstain from drink, abstain from ill thoughts, abstain from coherence, to watch the clock for hours, to count the minutes, to note the days and nights in a way that the passing of time does not normally call for) was punctuated by the fast and ferocious. The beautiful and timely death of Muhammad Ali, the greatest heights we have seen of lived Islam in America, met the unsparing, grotesque horror of unimaginable, rapid fire violence and loss: Orlando, Chicago, the Mediterranean Sea, Yemen, Karachi, Mogadishu, Oaxaca, account after account of domestic and sexual violence, Istanbul, Chicago, Afghanistan, northern England, Dhaka, Baghdad, Chicago.

Light upon light; violence upon violence. Just as the moon appears larger near the horizon – an optical illusion playing tricks on our perception – truth also felt illusive, shattered into a million, crimson pieces. Slowness became fast.

In Ramadans past, the nights – and not bloodshed – were usually the inflection points. Night brought water, food, caffeine, and an oasis of coherence between long and sleepy days of deprivation. Night brought with it the seductiveness of redemption: prayer, focused desires, the distinction of and good conscious of feeling faithful. This year the inflection points have been chaotic waves of disruptive violence both near and far. This month the Ramadan moon’s magnificence shed light upon human darkness so great it scattered evil without the aid of any devil.

Lurking below the pursuit of seeking God this month has been something undeniably grotesque and frightening. Our impotent protests squashed, this faith of ours, this faith of many, this faith of more than a billion people continues to be branded with the madness, bloodshed, and violence of lost souls. Deep in the belly of the beast, we scream aloud that we are not of them, we are not like them, that violence hits us hardest but fewer and fewer listen. Further in, we point out that the violence of the ‘civilized’ is never measured, that the violent consequences of slavery, colonization, and the “new Jim Crow” is nothing new, never noticed even as it devastates many whose lives don’t seem to matter.

As another tree falls in the forest of our protests, violence continues to circle in on people who look like us, people who believe like us. As we seek and beg for protection from evil that cannot be chained, we are made conscious that far too many others see the devil when they see us. What a wretched fate. Are we really to find ourselves – let alone God – in this overwhelming sense of chaos?

And yet, in the incongruous fast and slow of this Ramadan, in this flood of digressive information, begins to surface a lesson I know I’ve seen before: within chaos lies unique strength. Maddeningly reductive storylines and popular, fear-based narratives coalesce with the freight-train momentum of crimson violence, unleashed bigotry, and the fear of uncertainty to bring a strange sort of spiritual climax – a magnified spiritual loneliness that could never be born out of order. This digressive course strangely brings us to what we hope most for in Ramadan, a pathway to God.

While the madness has been anything but a virtue for the suffering – what comes out of it is a beseeching like no other. Without the languid distraction of impeccable, immaculate, and easy to perform worship, a dynamic worship is possible. It is in these days that God and that which God loves becomes most magnetic.

Poets have written about this for centuries, before ink even existed. Great discovery arises out of chaos, from entering the space that is riskiest, least certain. Nothing that happens would have been possible without it, in fact. In chaos, lies another chance, coherence even. Stability flows out of disorder. The fleeting, the spectral, sheds light on the Eternal. It is of such moments – such times – that the thing is made in us that endures, that lasts, that brings us to eternity and God.

Chaos upon chaos; light upon Light. Freedom is the choice that arises out of rejecting enslavement and apathy. May our beseeching this Ramadan bring us to another more lasting place. This Ramadan, as in every Ramadan that came before and every Ramadan that will come after, the suffering and the spectacle are not for nothing. Tell God everything.

“You must have chaos within you to give birth to a dancing star.” (Friedrich Nietzsche)

Samar Kaukab is the Exective Director of Arete, a research accelerator at the University of Chicago. Passionate about the intersection between gender, Islam, and the lived experiences of Muslim women, she writes and serves on the Advisory Board for AltMuslimah. You can follow her on Twitter at @samarkaukab. 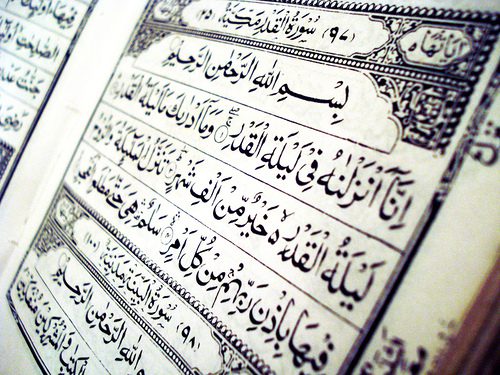