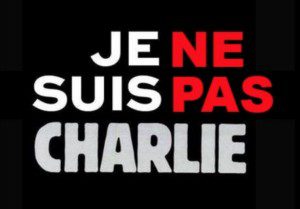 I fully support the right, and I also deeply appreciate the sentiment, of the cartoonist Luz, who is one of the survivors of the despicable attack on the office of satirical magazine Charlie Hebdo that was attacked by Al Qaeda last week. Here is Luz’s (translated) statement in full:

I invoked all the talents of the magazine, all those who were not there any more, all those were still there, I said to myself, we must do a drawing that above all makes us laugh, and not one on the emotional charge we are victims of.

I had the idea of drawing this character of Mohammed, as it’s my character, because he existed, at least in people’s hearts, and in any case he exists when I draw him.
He is a character that got our offices burned, and a character who at first got us treated as the great white knights of the freedom of the press because the offices had burned down. Then a year later when we redrew the character we were treated as dangerous provocative and irresponsible. So this character led us to be called either white knights or provocateurs, whereas we are above all cartoonists who draw little people like children do.

The terrorists were once kids, they drew like us, like all kids, then one day they perhaps lost their sense of humour, perhaps their child soul able to see the world from a bit of a distance, because that’s Charlie – being able to draw the world from a small distance. So I drew saying to myself: “I am Charlie”. That was my idea but it wasn’t enough.
The only idea left was to draw Mohammed, I am Charlie. Then I looked at him, he was crying. Then above, I wrote: “All is forgiven”, and then cried. We had the front page, we had finally found this bloody front page. This was our front page.

This was not the front page the world wanted us to draw, it was our front page.

This is not the front page that the terrorists want us to draw, as there are no terrorists in it, just a man who cries: it’s Mohammed. I am sorry that we drew him again, but the Mohammed we drew is a Mohammed who is crying above all.

Which is why, I regret that I can’t join in the viral sentiment of Je suis Charlie (“I am Charlie”) – because the image of the Prophet SAW, though penned by Luz with truly noble intentions, will be and has already been co-opted by those who in action support the terrorists’ interpretations of my religion and my Prophet SAW – the Islamophobes. I support Charlie Hebdo’s right to free speech unequivocally – including their right to be tools. And I don’t begrudge or take offense at the mad rush to buy the new issue of Hebdo with Luz’s cartoon on the cover – but I have no illusions that those copies are bought in the name of free speech alone.