Photos from around the world on the beginning of Ramadan

Every year, the Boston Globe does a photo feature on the start of Ramadan, as part of their “Big Picture” series. They pick photos that really try to capture teh diversity of muslims and Islam around the world, engaged in the common acts of prayer and fasting. This year is no different, with some quite striking photos – as usual, the best ones are of children, including my favorite below. My only complaint is that apart from one photo of muslims praying in London, photos of muslims in the West (America and Europe) are curiously absent. 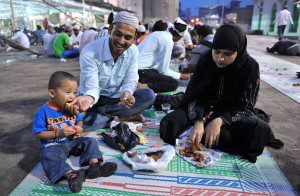