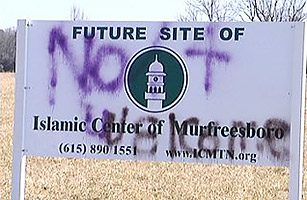 The muslim community in Murfreesboro, TN (ICMTN) has been trying to build a mosque for several years now, in the face of vicious Islamophobic opposition from locals who have repeatedly insisted that Islam is not a religion but a political cult and that the mosque represents the vanguard of some bogeyman invasion of Shari’a and terrorists. It would be laughable if not for the fact that the opponents of the mosque have succeeded in delaying the project over and over again. The entire story is nicely summarized in the CNN documentary, “Unwelcome: The Muslims Next Door” by Soledad O’Brien, which is available in its entirety on Youtube:

The entire affair is similar to the “ground zero mosque” (which was neither at Ground Zero of 9-11 nor a mosque) issue in New York City, though at least in Murfreesboro the muslim community has managed to break ground. However, construction now may be halted due to a legal technicality:

Chancellor Robert Corlew III ruled Tuesday that the commission failed to give adequate public notice of a May 24, 2010, meeting. At that meeting, commissioners approved the new building plans for the Islamic Center of Murfreesboro. But the judge said the commission’s actions were “null and void.”

State law requires that government bodies provide adequate public notice of meetings, but it does not offer many specifics beyond that. Attorneys for Rutherford County have argued that the notice in the printed edition of the Murfreesboro Post and on the paper’s website met the notice requirements.

The county’s legal department did not return calls late Tuesday.

Jim Cope, Rutherford County attorney, told The Tennessean in July 2011 that if the site plan approval was revoked, then mosque leaders probably would have to reapply to the planning commission. Because the Veals Road site is already zoned for religious use, there would be no public hearing or comments on the site plan.

The county attorney also could appeal the decision.

The judge said the commission can meet again to discuss the mosque project, as long as it gives proper notice to the public. Mosque opponents and other members of the public have a right to attend that meeting, but they don’t have the right to speak at the meeting, Corlew wrote. And any future decision by the commission can’t discriminate against members of the mosque, he said.

The next commission meeting is set for June 11.

Imam Osama Bahloul said leaders of the Islamic center would do whatever the county asked of them. “We want to obey the law,” he said. “We want to be good citizens.”

Another story about this in CNN gives us more reaction from the muslim community’s imam, Osama Bahloul:

“Everyone is really shocked, many people are crying about this,” Imam Osama Bahloul, leader of the Islamic Center of Murfreesboro, said early Wednesday morning. “We did exactly what other churches in the county did. We followed the same process that other churches did. Why did this happen? Some people feel like it is discrimination.”

The new mosque was supposed to be completed in July, Bahloul said. The congregation has outgrown its old facility and now worshipers have to pray outside the crowded mosque.
He says he is unclear exactly what he will do next. But he plans to keep fighting.

“I am confident that American values will prevail in this,” the imam said. “What makes America so special is how it handles freedom. This decision does not seem like it reflects American values.”

As President Obama said of the NYC issue, “Muslims have the same right to practice their religion as anyone else in this country… That includes the right to build a place of worship and a community center on private property in lower Manhattan, in accordance with local laws and ordinances.” The same holds true for Tennessee, and ironically it’s the opponents of the mosque who are the ones imposing a religiously oppressive theocracy on America, not ICMTN.

It’s worth noting that Pastor Russel Richardson, of the adjacent Grace Baptist Church, disagrees with the anti-mosque sentiments. On the church’s website, which seems to be offline at present, he had posted:

“The Heart of the change in a Christian’s life from before to after salvation is love. Jesus said that we would be known to be His disciples by the love we have for each other. In fact, He commanded it. In Luke 13:34-35 Jesus told us that we were not allowed to be without love for other believers. Instead we were to love each other in the same way that He loved us. That is a far cry from the way we see Christians treating one another in churches today. Yet it is our love for one another that is supposed to distinguish us from people who are not followers of Christ. So if it can’t be seen in our lives….You work it out. God bless you all.”

Pastor Richardson has also stated to the media, “If we infringe their freedom, we infringe our freedom.” That makes opposition to the mosque a tragedy in its own right, and not just for the muslims who dream of praying there someday.

Starred review from Publisher's Weekly for I Speak for Myself: All American (and last chance to pre-order)
archives most recent
More from Beliefnet and our partners
previous posts