Muhammad Asad and Islam as a rational faith

There’s a lengthy essay by Talal Asad of his father, Muhammad Asad (b. Leopold Weiss 1900 d. 1992), a convert to Islam from Judaism and one of the 20th century’s great Islamic thinkers. I found this part particularly resonant about how at its core, Islam is an appeal to reason as well as faith:

The first and most important idea in my father’s vision has to do with his conviction that access to Islam is based on reason, and that therefore argument is necessary to becoming and being a Muslim. When I was a boy he used to tell me that one must try to persuade other Muslims and non-believers not by force but by reason: This is what the Qur’an means by saying “There is no compulsion in religion”. In the Qur’an, he pointed out, God always addresses human beings by appeal to reason. If you read it carefully, you will realize that the Qur’an is continually engaged in argument by means of provocative questions because argument is what it expects its listeners to understand. So when the Islamic message fails to persuade by reason, he insisted that Muslims must live in mutual acceptance with the followers of all “religions,” hence another Qur’anic saying: “To you your religion to me mine”. God reveals his message at a particular moment in history through Muhammad, “the last of the Prophets,” but he doesn’t control everything in the world. Humans are free to choose what to believe and how to act: “Truly, We offered the trust [of reason and volition] to the heavens, and the earth, and the mountains: but they refused to bear it because they were afraid of it. Yet man took it up – for, truly, he has always been prone to be most wicked, most foolish.” Divine intervention, my father claimed, is not essentially an Islamic idea; the only miracle in Islam is the Qur’an itself. Hence another of his favorite Qur’anic citations: “Truly, God does not change a people’s condition unless they change their inner selves.”

Related: Asad’s autobiography, The Road to Mecca (which was also made into a documentary in 2009) 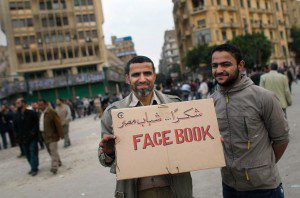 Mubarak, Facebook! and shukran
archives most recent
More from Beliefnet and our partners
previous posts