It looks like Israel’s Ambassador to the United States, Michael Oren, was one of the attendees at the White House Iftar a couple days ago, which is pretty cool in its own right. But now comes word that Ambassador Oren intends to host an Iftaar of his own, which is really a wonderful gesture:

In a note on Facebook, Oren noted that three years ago he was the first Israeli ambassador to attend the White House dinner and was “deeply honored.”

He added that he will be hosting his own Iftar meal reception, which he said would be the first at the Israeli ambassador’s residence.

I haven’t seen any further details of this yet but the guest list to the Israeli Iftaar will certainly be the subject of much speculation and interest!

I’ve long argued that Muslim Americans need to find common ground with Jewish Americans – there’s so much from the latter’s experience that we as a community can learn from and benefit from. In fact, Jews and Catholics are probably our role models in terms of coping with immigration, and the assimilation vs integration debate. This point was actually made in the Wall Street Journal a few days ago by David Campbell and Robert Putnam:

There was once a time when Jews and Catholics faced greater hostility than Muslims (and certainly Mormons and Buddhists) do today, even including mob violence. The accusations commonly leveled against Jews and Catholics—all the way up to the 1960s—should sound familiar. Among other things, their religions were said to be incompatible with America’s democratic system of government, their adherents beholden to foreign influences.

While anti-Semitism and anti-Catholicism have not been completely extinguished, today examples of such bigotry are the exception and not the rule. Jews and Catholics have firmly secured a place in America’s kaleidoscope of religions.

If anything, American Jews and Catholics are natural allies to Muslim Americans and we should be seeking as many avenues of cooperation and mutual benefit as we can (and this alliance should require giving on our part as well as receiving).

Related, the Southern Baptists recently came out swinging against Herman Cain on muslim-Americans’ behalf, as well. And even with Herman Cain, it seems that honest outreach by the muslim community does make a difference. 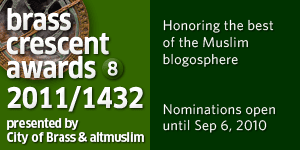