Laylatul Qadr, the Night of Power

The Night of Power is described in just five brief, magnificent verses of the Qur’an:

We have indeed revealed this (Message) in the Night of Power; And what will explain to thee what the night of Power is? The Night of Power is better than a thousand months. Therein come down the angels and the Spirit by Allah’s permission, on every errand of Peace. This until the rise of morn! [Qur’an 97:1-5, MP3 recitation by Husain Saifuddin DM]

Like moonsighting, there is some difference between muslim schools of jurisprudence as to the actual date of Laylatul Qadr, but all muslims agree that this it was the night of the Revelation of the Qur’an to the Prophet, and that prayer and supplication (ibadat and dua) on this night are amplified to immense degree.

The last weeks of Ramadan have been of intensifying ibadat, “kicking it up a notch” in a sense. Laylatul Qadr is the apex of Ramadan, the highest point of our efforts, and the maximum reward.

As readers know, this past year I performed the Hajj pilgrimage, and in Hajj there is also a key day around which the entire journey revolves, namely Yawn al Arafat. In Hajj this is a physical journey, culminating in a physical location, whereas in Ramadan it is a spiritual journey culminating in a spiritual elevation. In both cases, we undertake extensive preparation, which culminates in an intense experience that leaves us drained yet rejuvenated.

And after it is over, comes the certainty that the time remaining is scarce and dwindling away. The longest days have given rise to the longest night, but the shortest month is even shorter still, now.

But for now, my focus is on maximizing the opportunity given to me by Allah tonight. 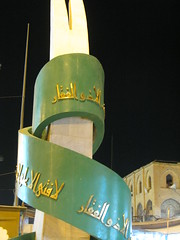 Who is Ali (as), the universal hero of Islam?
archives most recent
More from Beliefnet and our partners
previous posts