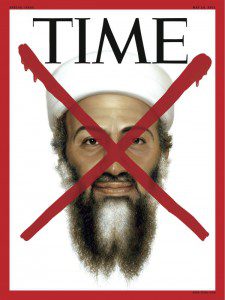 When my wife told me of Osama bin Laden’s death this morning after i stepped out of the shower, news she had picked up from Facebook (all our Californian friends who were actually awake during President Obama’s live speech last night), I was initially unable to believe it. After ten years, suddenly now? Was it really him? Was he really dead? How do we know?

Over the next hour, as I surfed Twitter and Facebook and blogs and Retweeted and Liked with wild abandon, I was ecstatic. DNA tests, a secret raid, a mansion off-the-grid – it all fell together and the triumph of our armed forces and intelligence services in finding Enemy Number One was like a delirium of joy. This one man has caused us so much pain, torn apart our American family, degraded our freedoms, sown suspicion, and of course murdered thousands worldwide – and the bulk of his victims in all these ways were Muslims. What else but sheer joy can we feel?

Ecstasy next gave way to Pride. All my pentup frustration and fear of 9-11, the horrific attack and the impact on my psyche as an American and a patriot – were suddenly released. WE DID IT. As Obama said, there is nothing that America couldn’t do when our minds are set to it, and even the colossal insult of 9-11 could not be without consequences. America again showed that we had power, relevance, and strength. The world again looks at us in awe.

As the sheer rush subsided, I will confess to feeling Calculation. What were the consequences of this? Would it help the President make the case for withdrawal from Afghanistan, or keep us there longer? What would the impact be on our relationship with Pakistan? Would the President finally earn the respect of the 40% of Americans who still believe he is Muslim? (Nevermind the Birthers, the Muslim smear is by far the more insidous). And of course, would this example of President Obama’s leadership suffice to guarantee his re-election?

But now, finally, I feel disquiet. The elation of bin Laden’s death has not served my country or solved the problem of global terrorism. Al Qaeda still roams in Waziristan, the Taliban still remain. Hamas still refuses to recognize Israel. On a smaller scale, we still remove shoes at airports, and suspicion of Muslims remains. The Muslim smear is not refuted, the Patriot Act not repealed, and the Obama administration will continue it’s assertions of executive power as needed, buttressed rather than humbled by this amazing success.

I think we as Americans deserve our moment of joy. But there’s so much work to be done, yet – and so little, really, has changed. Had we achieved this task 5 years ago, the world might well still have been changed by it. But now, the only thing left to do is to get back to work.

American Muslim responsibilities to our selves and our communities remains: we cannot let ourselves be lulled into complacency, not while Anwar al-Awlaki remains in Yemen, preying upon us, seeking to instigate more Fort Hoods and Times Squares.

In the end, there’s a sixth stage: resolve. We go forward from here. bin Laden is dead, but not his legacy.

Mission Accomplished: Obama got Osama
archives most recent
More from Beliefnet and our partners
previous posts