Apologies for my long hiatus here – I spent the last third of Ramadan and Eid day (which we observed on Thursday) in Houston with family, blissfully immersing myself in the rhythms of worship. I’d already decided I wouldn’t have anything more to say about the Park51 project, and didn’t have much to say about Pastor Jones and burning Qur’ans either. Ultimately these were just distractions from what was really important – faith and family.

For the last ten days in Ramadan, I prayed 5 times a day at our local masjid. I read more of the Qur’an, I am ashamed to admit, than I do the entire rest of the year combined. I wept, for the shahadat of Imam Husain AS and Moulana Ali ibn Abi Talib AS. I woke up early and slept late, or not at all – two nights spent entirely in prayer. And of course, I fasted, which despite the long summer days and Houston heat, were almost effortless due to the total immersion I had achieved. I lost about 5 pounds and gained most of that back eating nihari on Eid day.

It isn’t easy removing yourself from the world. And as other friends have pointed out, the controversies at the intersection of 9-11, Islam, and religious tolerance as a whole have been very distracting indeed. I also have felt the temptation towards distraction; my final post on Park51 drew me media invitations and record web traffic, but by escaping to Houston I was able to resist.

Today is 9-11, which was an American tragedy, and a Muslim tragedy – but I am both American and Muslim, and yet the day finds me strangely disconnected. Perhaps the acrimony over the “ground zero mosque” debate has left me cold, or perhaps it’s the way in which 9-11 long ago ceased to be anything but a political football. It’s practically Al Qaeda ex machina.

I think that to properly learn from an experience – be it Ramadan, or 9-11 – we have to allow ourselves to rediscover the center, to immerse ourselves and cast aside all the distractions. Physically, or emotionally, we must exclude the outside and try to seek the essence. Now that Ramadan will no longer overlap 9-11 next year, and next year being the 10-year anniversary, I think that it will be easier to reconnect with both.

As far as my writing here goes, I am also going to find my center. For typical blogging and commentary, I can’t recommend Talk Islam more highly, and of course there’s my Twitter feed (@azizhp). But here at City of Brass, I intend to take a more introspective view from here on out – less frequent, more thoughtful. If I can’t add value to the debate, I don’t think I need to say anything. Only then will anything I say have any value at all. 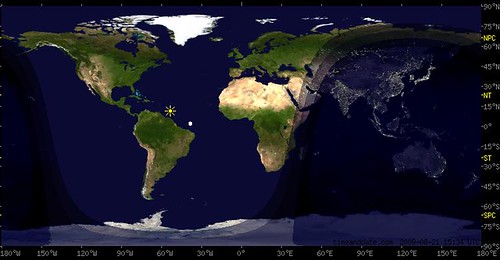