South Park, Mohammed (and Santa), and the freedom to blaspheme

Welcome, CNN.com readers! I’d like to point out that though the article implied I approve of depictions of the Prophet, I actually do find them offensive. However, in my piece below I was trying to explain that the degree of offense varies with intention; and I take greater offense at those who would bring a molehill to Mohammed instead of a mountain.

The famously irreverent and deliberately provocative TV show South Park has had a long fascination with the Prophet Mohammed SAW. The Prophet SAW first made an appearance on the show as a member of a superhero team comprised of famous historical figures (“Super Best Friends”), which didn’t really attract any attention. But after the global controversy over cartoons of the Prophet SAW in the Danish media, South Park tried to depict the Prophet in the name of free speech and expression – only to be pre-emptively censored by their network. This was ironic, because the episode in question (“Cartoon Wars”) was all about media self-censorship and free speech.

Last week, the show aired its 200th episode, a celebration of all the controversies it has deliberately sought out over the years. The Prophet SAW made an appearance, this time in a bear suit, to give other historical and religious figures advice on how to avoid being insulted in the name of free speech. The result? death threats from a radical web site:

Revolutionmuslim.com, based in New York, was the subject of a CNN investigation last year for its radical rhetoric supporting “jihad” against the West and praising al Qaeda leader Osama bin Laden. Its organizers insist they act within the law and seek to protect Islam.

On Sunday, Revolutionmuslim.com posted an entry that included a warning to South Park creators Trey Parker and Matt Stone that they risk violent retribution – after the 200th episode last week included a satirical discussion about whether an image of the prophet could be shown. In the end, he is portrayed disguised in a bear suit.

The posting on Revolutionmuslim.com says: “We have to warn Matt and Trey that what they are doing is stupid and they will probably wind up like Theo Van Gogh for airing this show. This is not a threat, but a warning of the reality of what will likely happen to them.”

(…) The entry on Revolutionmuslim.com goes on to advise readers:

“You can contact them [the makers of South Park], or pay Comedy Central or their own company a visit at these addresses …” before listing Comedy Central’s New York address, and the Los Angeles, California, address of Parker and Sloane’s production company.

Contacted by CNN, the author of the post, Abu Talhah al Amrikee, said that providing the addresses was not intended as a threat to the creators of South Park but to give people the opportunity to protest.

Most other blogs and news sites are not providing a link to RevolutionMuslim.com – which appears to have been hacked, possibly by angry fans of the show – but I think it’s important to let these idiots know that they are being critiqued. And my critique of them is much the same as my critique of Anwar al-Awlaki: they are cowards, who seek to gain publicity for themselves. In a lot of ways, they have much in common with South Park creators Trey Parker and Matt Stone, except that the latter are at least funny on occassion. 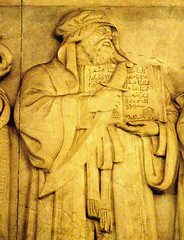 The Prophet SAW has been depicted by non-muslims with respect many times in the past – including a marble frieze of the Prophet as one of history’s great lawgivers, on the South Wall inside the Supreme Court building in Washington DC (photo at right). Muslims themselves, particularly in Iraq and Iran, are fond of depictions of the Prophet, with many public paintings and billboards of him and Ali ibn Talib AS. These are expressions of respect or love, and are not in any way an insult or an undue reverence.

In fact, it is precisely the over-reaction of extremist muslims who wave around threats of violence that leads to more depictions and insults to the Prophet, not less. The right way to inculcate respect for the Prophet among non-muslims is not to act like a barbarian but to simply express ourselves and explain our beliefs – and then excercise our own right, to walk away. It is by their own actions, supposedly in “defense” of the Prophet, that these extremists actually cause greater offense to the Prophet’s legacy than any mere cartoon. After all, the Prophet SAW is judged by non-muslims solely by the behavior of those who profess to follow him.

I don’t watch South Park, and likely never will. But I much prefer their attempt at depiction of the Prophet SAW, which is rooted in a simple need to assert their creative freedom, rather than any genuine intent to defame or insult Islam – quite unlike the Danish newspaper cartoons, which were created with only malice in mind. To understand this, compare and contrast the images of the Prophet as a super hero or a bear, versus a dark figure with a bomb in his turban. The real insult to the Prophet is in refusing to make a distinction at all.

Related: The muslim women lawyer organization KARAMAH visited the Supreme Court to investigate the frieze of the Prophet SAW and have a very nice report on their findings.

UPDATE: A conversation with a reader about muslim sensibilities, assimilation, and tolerance.

UPDATE 2 – it wasn’t Mohammed after all in the bear suit, but actually Santa, according to people who’ve actually seen the episode. This revelation makes me realize that the South Park creators Matt and Trey are, quite simply, brilliant demigods. Well played, sirs. Well played. Of course, that didn’t stop Comedy Central from censoring the episode anyway…