All muslims are Taliban, Islamophobia is the new anti-Semitism, and Shari’a is the new Protocols of the Elders of Zion. That’s the operational reality that muslims in Europe must acknowledge, in the wake of a referendum to ban the construction of minarets in Switzerland: 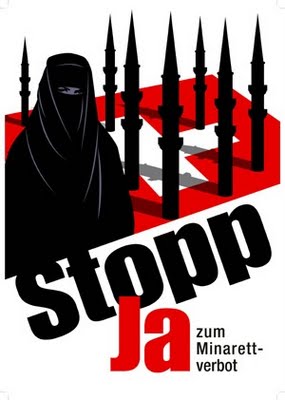 In a vote that displayed a widespread anxiety about Islam and undermined the country’s reputation for religious tolerance, the Swiss on Sunday overwhelmingly imposed a national ban on the construction of minarets, the prayer towers of mosques, in a referendum drawn up by the far right and opposed by the government.

The referendum, which passed with a clear majority of 57.5 percent of the voters and in 22 of Switzerland’s 26 cantons, was a victory for the right. The vote against was 42.5 percent. Because the ban gained a majority of votes and passed in a majority of the cantons, it will be added to the Constitution.

The Swiss Constitution guarantees freedom of religion, but the rightist Swiss People’s Party, or S.V.P., and a small religious party had proposed inserting a single sentence banning the construction of minarets, leading to the referendum.

The campaign for the ban was explicitly racist, with imagery of a burka-clad woman in front of a field of missile-like minarets rising from the Swiss flag. The rhetoric was no less offensive, with SVP leaders claiming that minarets were a symbol of “the political will to take power” (my emphasis) and radical feminists making common cause with the right-wing out of fears that “If we give them a minaret, they’ll have us all wearing burqas… we’ll have Sharia law and women being stoned to death in our streets.”

Note that the direct accusation here is that all muslims in Switzerland were complicit in a grand conspiracy to undermine Swiss culture and remake it in the image of the Taliban. This, despite the fact that muslims in Switzerland are only 5% of the population, 90% of them hailing from Turkey and Kosovo and already highly Europeanized and culturally assimilated. Michael Totten’s first-hand report from his travels in Kosovo gives an exellent overview about the cultural and religious sensibilities of muslims from these regions; the menacing burka-clad woman in the SVPs campaign propaganda was as alien to the Swiss muslims as their non-muslims fellow citizens.

The irony of the ban is that it was sold as a means to prevent extremist Islam from taking root in Switzerland, but if anything actually increases that risk by sending a clear message to muslims that they are not welcome members of civic society. For its part, the Swiss muslim community has sought to downplay the vote, shunning interviews with foreign muslim media organizations and seeking to maintain a low profile. The challenge for them will be to weather the storm of increased Islamophobia that the racist campaign stoked and exploited – a burden that they would have borne regardless of the outcome of the vote. And they must now be extra vigilant that their own do not respond to this deliberate provocation by hardening their hearts against their nation and their fellow citizens. It’s easy to turn inwards and dwell in bitterness and humiliation, but it’s more important to look forward.

The simple truth is that Islam will grow and thrive in Europe over time. Even without minarets. If anything the muslims in Switzerland should accept the ban as a challenge and innovate mosque architecture to comply with the ban, and assert their Islamic and Swiss identities proudly. In this they might draw inspiration from their German counterparts, whose stunning and innovative mosque designs are a form of “confrontational architecture“. Europe’s long legacy of religious intolerance and oppression, is what gave birth to the freedoms that until now the Swiss nation had enshrined as core values; In much the same way, this modern persecution is the impetus that muslims in Europe must accept as a challenge to perpetuate and protect those very same values and freedoms.

Related: Yasir Qadhi’s superb, must-read article on the minaret ban which really drives home the hypocrisy of the West, and Michael Totten’s afore-mentioned piece, “The (Really) Moderate Muslims of Kosovo“. Also see my earlier essay on the threat to religious freedom in Europe, about not just the swiss minarets issue but also the proposed ban on mosques in Italy and the controversy over a mosque in Cologne, Germany.