Is Ayatollah Khamenei dead or in a coma?

Take this with a heavy dose of salt, as it may more reflect wishful thinking on the part of the American Enterprise Institute (which is neocon central), but there are supposedly rumors in Tehran that Khamenei has died:

(…) The passing of Khamenei would represent a seismic shift in the Islamic Republic’s power equations. With no successor-designate, Khamenei’s death would unleash a huge power struggle.

Several things will happen once Khamenei dies. Officially, the Assembly of Experts, currently headed by former President Hashemi Rafsanjani, anoints the next Supreme Leader. Behind the scenes, however, the major power brokers-whether on the assembly or not-will jockey for power and seek consensus. If the decision is fractious, the assembly may decide to appoint a clerical council in the interregnum period.

The Islamic Revolutionary Guards Corps (IRGC) will seek to influence the selection, either of the interregnum council or of the next Supreme Leader. The most radical scenario-but an increasingly plausible one-would be for the IRGC to lobby to abolish the institution of leadership, thereby transforming the Islamic Republic into a presidential system and giving ultimate power to current president Mahmoud Ahmadinejad, a veteran of the IRGC and its primary benefactor.

I think that this analysis (by stalwart neocons at the AEI) discounts Rafsanjani a bit too easily. Power centralizing in Ahmadinejad’s hands would be a wet dream of sorts for those who insist on cataclysmic confrontation with Iran; they prefer the simplistic view of Iran’s internal politics, rather than the complicated picture that emerged during the post-election protests. It’s extremely unlikely that the IRGC would not want at least some clerical figleaf for their puppet; if the Supreme Leader title ceases to exist, so too does the Islamic Republic itself, as far as ideology goes. If it’s Ahmadinejad in power, then Iran might as well be… Egypt.

I’d scan the Iranian tweets to see what they make of this, but Twitter is down as of this post. Maybe the rumors are true and the twitterverse just imploded as the entirety of Iran came online to exult. But I doubt it. Or it could just be wishful thinking/rumor mongering by Michael “faster, please” Ledeen, citing “excellent sources.” 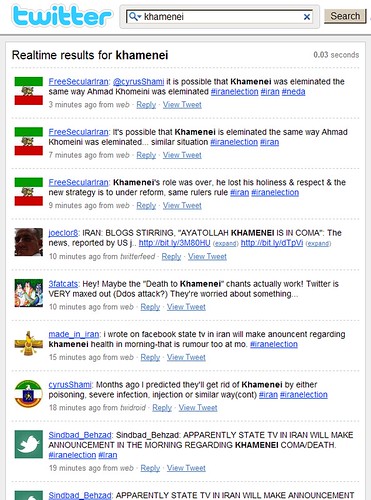 UPDATE: twitter is back; here’s the real-time search results for “Khamenei”. Rumors are thick, with Khamenei reputed to be in a coma or dead. Among the memes taking shape, is the suggestion that Khamenei has been “disposed of”. Oh, boy.

UPDATE 2: Rumors say that there will be an official announcement on Iranian state television in the morning (which is actually pretty soon – I’ll stay up late as I can to monitor). Here’s what Ledeen’s source claims, though I find the reference to “gods” (plural) rather suspicious:

was taken to his special clinic. Nobody – except his son and the

doctors – has since been allowed to get near him.

His official, but secret, status is: “in the hands of the gods”.

Reportedly this collapse is natural. Many would like him to move to his

afterlife but reportedly the collapse was not ‘externally induced’

[no poisioning]. The few insiders who know about the collapse see

this development “as a gift from the gods”.

His condition had already seriously deteriorated over the last

months, aggravated by his nervous condition due to [1] his

inability to solve the problems created by his manipulation of the

election results and the refusal of [a large part of] the

population to accept this, plus [2] his loss of religious authority

by means of the repeated condemnations of events by senior clerics

Reportedly the principal aims of Khamenei of the last couple of

weeks, if not months, were to ensure [1] a positive reputation as

their wealth, reportedly now largely in Syria and in Turkey (remember the truck convoy of $8.5 billion in cash and gold that was seized by the Turks?).

Outlook is uncertain but speculation is – considering that he is in

coma since more than 24 hours – that he may not come out of his coma and/or that he may die very soon.

develop between the powers behind Rafsanjani, who will immediately

claim temporary religious authority and overall control, and the

powers behind Achmadinejad who will scramble in order to regain

control and ensure their survival.