UPDATE 031810: Fox News falsely claimed that NEJM has a new poll indicating that doctors no longer support health reform; this is false. See here for details.

There’s an alarmist poll out from Investors Business Daily that makes the shocking claim that almost half (46%) of America’s doctors will quit under Obama’s proposed health care reform plan. The implications of such a finding – which runs counter to the American Medical Association’s own support of President Obama for reform – are that one result of reform would be that America’s doctors would revolt. But does this poll make any sense?

It turns out that the poll was a mail-in questionaire, not the usual phone-based poll. This is important because of selection bias; doctors who are predisposed to feeling threatened by proposed health care legislation will be more likely to respond. Also, mail-in responses tend to be skewed towards older repsondents, who also are more likely to be skeptical, or at least more willing to retire.

The poll itself was terribly written; one of the questions read, “Do you believe the government can cover 47 million more people and it will cost less and the quality of care will be better?” which is really three questions, and heavily biased towards skepticism (indeed, 71% answered No). It’s worth noting that the pollling outfit has a horrendous track record; polling demigod Nate Silver comments:

As we learned during the [Presidential] campaign — when, among other things, they had John McCain winning the youth vote 74-22 — the IBD/TIPP polling operation has literally no idea what they’re doing. I mean, literally none. For example, I don’t trust IBD/TIPP to have competently selected anything resembling a random panel, which is harder to do than you’d think.

Nate also notes that the poll hasn’t released any details of methodology, and bizarrely also says “responses are still coming in.” Responses are still coming in? Why would they release any results until all responses have come in? The percentages are utterly meaningless otherwise! Nate advises people to ignore the poll entirely; it’s going to be taken up by right-wing idealogues of course, but that was its intended audience from the beginning.

So what do doctors actually think? It’s worth re-stating up front that despite the misinformation dogma of the right, the proposed reform is in NO WAY a government “takeover” of healthcare. A govt-run health care system akin to Britain’s NHS is one in which doctors are employees of the state and paid from the government, there is no such thing as a private practice. Our reform, in total contrast, is about health insurance, ie who pays the insurance companies for the premiums. For the most part, in the US, the answer is that the cost is shared between employers and employees, whereas the government pays premiums for elderly people via Medicare. Even the most radical reform of this system, a single-payer system which would essentially eliminate the private health insurance industry, woud not aount to a government takeover of health care per se. Of course, a single-payer system is off the table and the so-called “public option” would only apply to a tiny fraction of people who dont qualify for/are unable to obtain insurance through other means. And even that modest reform is likely not going to be in the final package.

All of this boils down to the fact that due to misinformation by the Republicans about health care reform being a “government takeover”, it is likely that many people who oppose it think it will be something it isn’t. In other words, the misinformation campaign (“death panels!”) is working.

But tehre are polls of doctors out there that are reliable and not subject to the bias and error of the IBD poll. The latest issue of the New England Journal of Medicine, one of the pre-eminent medical journals in the world, has results of a truly scientific poll whose methodology is indeed rigorous and public, which looked at physicians’ views about the public option and expanding Medicare. Here is a summary of their findings: 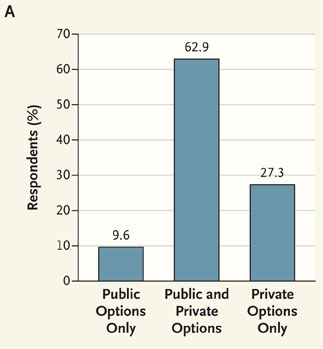 Overall, 58.3% of respondents supported an expansion of Medicare to Americans between the ages of 55 and 64 years (see Panel B of graph, online). This support was consistent across all four specialty groups, with proportions in favor ranging from 55.6% to 62.4% (P=0.08).

P-values! I swoon. This is a far more reliable study that can and should be taken seriously by policymakers. The full article at NEJM is worth a read, especially the discussion and conclusion, where they note that the support for a combined public/private solution even extends to physicians in the conservative south, physicians with a financial stake in their practice, and members of the AMA (which has historically opposed reform, but has supported the House legislation this time around).

The rationale for physician support for health insurance reform is intuitively obvious; by increasing the number of insured people, more patients are created who will make use of physician services. As the poll notes, support ranges across all physician specialties and practice types. Clearly, physicians as a group understand the difference between health care reform and “government takeover”. Granted, opponents of health care reform who insist otherwise aren’t exactly brain surgeons, though.

Related: Also see James Joyner’s comments on the IBD poll and the discussion at LOG. Meanwhile, NPR has a story on the NEJM-published poll.