I’ve been reading Tyler Cowen, Ezra Klein, and the League on the matter of the Baucus bill and am frankly bothered by the way in which progressives seem to be losing sight of the main goal of health care: to bring affordable coverage to 100% of all Americans. This is a goal that the vaunted public options does exactly zero to achieve, and it strikes me might actually be undermining these basic principles instead.

It should be noted, again, that the public option would only be available to a small fraction of citizens who are either ineligible or unable to afford private insurance. So the scope of the public option is limited to begin with, and certainly will be constrained so heavily that it will never, ever be the stealth road to single-payer that most of the progressives who are intent on making it a litmus test seem to think it will.

The problem is that the bipartisanship-obsessed reformers like Baucus are trying to trim the overall bill’s cost below arbitrary limits as a guiding principle, rather than trying to craft the best policy to achieve the primary goals and then simply determining the cost. What difference does it really make if the final bill costs $800b or $1200b over the next decade? We just spent $800b on bank bailouts! But when it comes to blue-collar industries like the automobile workers, or something as critical as universal health care, suddenly we are being penny wise and pound foolish.

The foolishness is laid out quite starkly in this graph of the cost of the insurance mandate on lower-income middle class families: 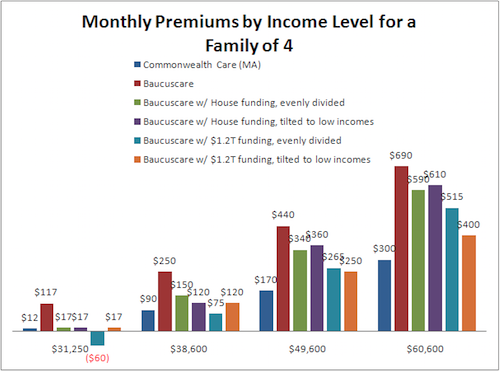 Republicans are calling this a middle-class tax increase, and they are right. The solution is not to scrap the bill but to spend more money so that the impact on the middle class is ameliorated via subsidies. Inclusion of a public option would actually suck up even more of the reform budget and cause these effective tax burdens to increase; if progressives really want a progressive policy, then they should concentrate their energy on increasing the overall budget for the reform bill so that the main goals: universal and afffordable coverage, are met.

And let’s not forget that Baucus only gets us to 97%. “Universal coverage” still leaves 3% – 9 million people – out in the cold.

Reform won’t come cheaply. By trying to play the “cost savings” game, progressives are validating the conservative framing that for some reason, health care reform must be uniquely held to absolute fiscal standards, none of which were required for other reforms in other sectors of the economy (not coincidentally, the ones that cater to upper class and corporate interests). Liberals should be making a forceful argument for spending the money we need to get the job done, not mooning over a fanciful and frankly emasculated “single payer lite” pipe dream.

Not to say that fiscal responsibility isn’t important. But instead of jumping through hoops to force the funding in, why not think outside the box for revenue? I am on record as supporting a VAT, coupled with a reduction in corporate income taxes. What if we further specified that all VAT revenue would first be applied to finding health care reform to make up the difference in case of cost overrun? Further, surplus from the VAT could be applied to pay into the Social Security trust fund, and after that pay down the national debt. There’s a lot of ways we could tweak the details, but the point is, where are the forceful progressive voices advocating for some manner of VAT to help achieve the goal? Yes, VAT taxes are regressive, but that can be partly ameliorated via subsidies, and let’s face it, paying a VAT will cost an individual less than having no insurance, especially if you are poor.

And one more thing – given that Baucus’ plan would hurt Medicare Part D to the tune of $174 billion, liberals should also be making a forceful case for drug price negotiation, as well. These are the real lines in the sand. Or at least, where they should be.

Let me reiterate: liberals should be arguing for more spending on the reform bill, new taxes like a VAT (coupled with other measures to make it palatable), and drug pricing negotiation, so as to ensure that we reach the 100% coverage mark and we do not raise taxes on the middle class. Instead, they remain obsessed about the public option. It’s a tragedy, and if and when reform dies and we are stuck with the status quo, the progressives’ ideological purity won’t mean a thing to the family who still doesn’t have a way to pay their medical bills for Timmy’s cancer.

read next post
Islam on Capitol Hill?
archives most recent
More from Beliefnet and our partners
previous posts