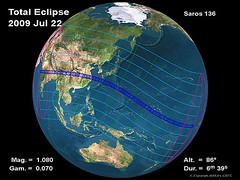 This Wednesday, the majority of mankind is for quite a show – the longest solar eclipse of the 21st century. As the NASA graphic at right (click to enlarge) makes clear, the path of the eclipse traverses half the globe, covering all of India and Indonesia and most of China, not to mention the rest of Eastern Asia and Japan. NASA has made a cool interactive map available using Google Maps to help you track the path for the total eclipse, though the boundaries of the partial eclipse are much, much wider. The path for totality however is notable in that it passes near major asian metropolises like Mumbai and Shanghai.

This eclipse is generating a lot of attention. There are plans to broadcast the eclipse in real-time on the Internet, via a team from the University of Madrid. It has some people predicting earthquakes and tsunamis off the coast of Japan (the theory being that tidal pull will exacerbate tectonic plates or something). And the tiny village of Taregana in the dirt-poor Indian province of Bihar is enjoying a massive boon in tourism and infrastructure spending, because of its ostensibly ideal vantage point for viewing the totality. Of course, Chinese scientists beg to differ, claiming China is the place to be. Interestingly, the best spot to catch totality might well be Iwo Jima, since the maximum duration (6 minutes) occurs closer to there than in mainland Asia.

There won’t be an eclipse like this for another 12 decades. That fact alone should inspire some awe – especially given that the sweep of centuries are like the second hand of the cosmic clock.

For detailed information on eclipse path, visibility, and timings, see NASA’s factsheet. Wikipedia has a nice summary of information about the eclipse as well. Finally, my Beliefnet colleague Lynn Hayes offers an astrological reading of the eclipse.

read next post
VIDEO: Obama at NAACP, "the pain of discrimination is still felt in America."
archives most recent
More from Beliefnet and our partners
previous posts