FACT: All Starbucks outlets in the Middle East are operated by MH Alshaya WLL, a Kuwaiti company.

FACT: Starbucks terminated its relationship with its Israeli
distributor in 2003, citing “ongoing operational challenges.” There are
no Starbucks outlets in Israel, but dozens in its hostile Muslim neighbors.

FACT: A Starbucks is currently in operation within view of the Kaba in Mecca. It opened a week before the Islamic hajj in 2007.
Starbucks has given the cold shoulder to Israel while deepening its
relationship with Muslim countries known to harbor terrorists. The
company has gone so far as to open a store in Islam’s holiest city,
tacitly endorsing the religion. 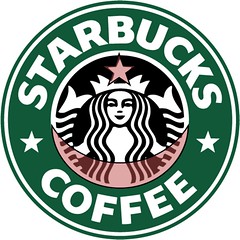 FACT: Its green-and-white logo shares design
elements with Saudi Arabia’s green-and-white flag. A crescent motif is also clearly evident, with the arms of the Starbucks girl the tips of the crescent, embracing the star (the star and crescent motif being a widespread symbol of Islam and featured on many muslim countries’ flags). The image of the girl’s hair could also be interpreted as a burka, covering her completely and hiding her form. (See image at right)

(hat-tip to Willow at Talk Islam)

read next post
an honor killing or "only" domestic violence?
archives most recent
More from Beliefnet and our partners
previous posts