Imagine an ethno-religious group that is treated as second-class citizens by their host country, and actively persecuted, with accusations of divided loyalties and sympathies to enemies of the state. Arabs in Israel? no – the Baha’i in Iran, who have faced increased repression from Iranian authorities of late. As ‘Aqoul ably summarizes,

Several leaders in the Baha’i faith — that other other other other Abrahamic monotheism — have been charged in Iran
with espionage and other crimes, with possible death penalty exposure.
These were generally seen as pretext charges for a broad official
chronic program of persecution. The charges are regarded as probable
pretext most especially because Baha’i have little access to secrets,
being denied official employment, and also because the alleged country
of espionagery, Israel, is naturally going to have relatively extensive
ties with the Baha’i leaders because the city of Haifa, Israel is the
site of the Baha’i Vatican.

Of course, since the Baha’i are not Arab, and outside the muslim mainstream (being an offshoot from the Shi’a Twelver faith), their plight does not get much attention from most muslim groups in the West who concern themselves with more fashionable causes.

The best resource on the Baha’i struggle in Iran is BahaiRights.org, a project of the Middle East Youth. I also highly recommend following @Kawdess on Twitter for timely coverage and links, on the topic of the Baha’i as well as other topic of general interest to middle east and muslim issues.

Incidentally, in my hometown of Chicago there is a magnificent Baha’i temple on the shore of Lake Michigan. It’s a glorious structure which I’ve visited (as a tourist) many times since childhood. On my recent trip back from Colombo last year I was able to take a picture of the temple from the air, which gives a sense of the harmonious yet imposing architecture, but of course is no substitute for actually visiting in person. 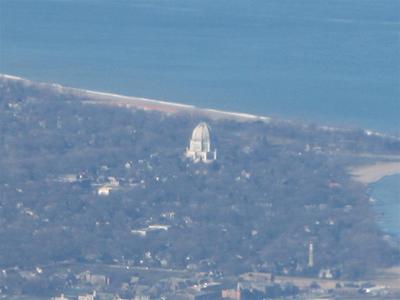 read next post
does religion cause violence?
archives most recent
More from Beliefnet and our partners
previous posts