The idea of the state of Israel is one I support wholeheartedly. A nation for the Jewish people, a homeland where they can engage in the same right of self-determination and chart their own destiny. However, this right and this dream cannot be attained at the expense of the same dream and rights of other peoples; in fact doing so is fundamentally antithetical to the ethos of the Jewish people themselves. Throughout their long (and persecuted) history, the principle of Justice is the defining trait, by which the Jewish people might legitimately be called a light unto nations. What terrible irony, then, that Israel acts to undermine that legacy and heritage! 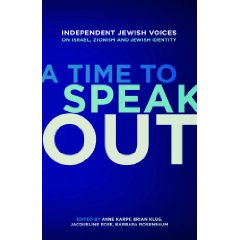 Israel is, by any reasonable definition of the words, an apartheid state, engaged in an illegal military occupation, employing collective punishment against a civilian population. Note that these terms are used without any hesitation by Israelis of all political stripes themselves; it is only in the peculiar US media and political milieu that such terms elicit such a defensive, denialist reaction. But this too is no surprise; the US political establishment sees Jews as a political asset to be cynically used for their own purposes, whereas the Israeli political establishment lays claim to the Jewish intellectual heritage of truth and self-critique). That heritage is celebrated by A Time to Speak Out, a new compilation of essays by leading Jewish intellectuals that serves as a sobering analysis of the cognitive dissonance of modern Israeli society and also a truly inspiring demonstration of the commitment to Truth and Justice that remains at the core of Jewish identity.

All of this is my prelude to the assertion that Israel’s actions in Gaza are profoundly non-Jewish, not only because it violates the very spirit of the Jewish character, but also in a more literal sense because it undermines the ostensible goals of the state of Israel itself – partly because the founding vision of Israel contains a fundamental contradiction. The idea of Israel in the abstract is a noble one, but in terms of providing a safe haven for Jews, is hardly unique to Israel – arguably, the United States itself is a superior home for the Jewish people to thrive and prosper, with free expression of their culture and faith. For similar reasons, I have also argued that America is the greatest Islamic country on earth; at its most basic, freedom is the key attribute, and nowhere else in the world are Jews (or muslims) more free to be Jews (or muslims) than in the United States.

Israel, however, was founded not on ideals of simply being a haven for Jews, but also with the Zionist goal of being an exclusively Jewish entity. This is a concept that is simply not compatible with modern liberal ideals. In a nutshell, Zionism in its modern form (to which all major Israeli poitical parties subscribe implicitly) requires three qualities: 1. Democracy, 2. Jewishness, and 3. Greater Israel. All three of these are under tension with each other, however, and the Gaza conflict has brought these tensions to the forefront. In subsequent posts, I intend to explore the intersection of these three concepts. The simple truth, however, is that Israel cannot survive as a meaningful political entity if it attempts to pursue all three. For survival, Israel must pick any two, or lose them all.

Note – I have blogged extensively about these issues in the past. I intend to reformulate my arguments more cohesively now and will draw upon those older posts as well, so if you are looking for some preparatory reading material, check them out. Also, I highly recommend Paul Rosenberg at Open Left and this essential New York Times editorial by Rashid Khalidi for some basic background fact-checking on the Gaza conflict.