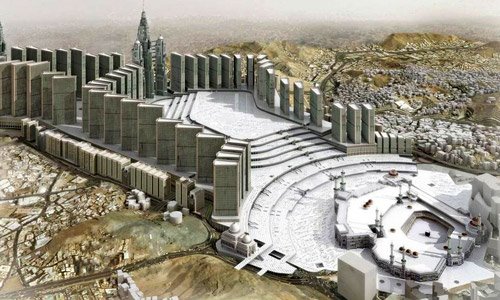 This is just one possible design that will be floated by star architects Norman Foster and Zaha Hadid, recruited by King Abdullah to vastly increase capacity at the mosque:

According to sources, the scheme for Islam’s holiest city could create a huge new structure around the central Haram mosque that will eventually be capable of holding three million people, making it the ‘highest occupancy’ building in the world.

The top-secret plans are being backed by King Abdullah ben Abdulaziz of Saudi Arabia who has asked a hand-picked collection of starchitects to ‘establish a new architectural vision’ for the 356,800m2 mosque complex.

The AJ believes that the project is likely to be phased, with phase one transforming the mosque from having an official capacity of 900,000 to 1.5 million. This will then go up to three million with the completion of several phases over the following five to 10 years.

It is understood the proposals have been split into two ‘tracks’, with Foster + Partners earmarked to look at a range of alternatives for the northern expansion of the Haram mosque. Ten other practices are also believed to have been approached to draw up feasibility studies for the extension programme, including Atkins.

Meanwhile Hadid has been given the prize task of coming up with ideas for the Haram mosque itself as well as ‘revisiting the whole area of the central district’. Another six other ‘world renown’ architects have also been linked with the job.

To get an idea of just how many existing buildings will need to be totally obliterated to make way for this behemoth, look at the following Google Map of the area:

Everything above and to the left of the Haram complex (white building in the lower right corner) will need to be razed. This represents a massive swath through the heart of the city.

Mecca is one of the world’s great historical sites – there are countless archeological treasures from the earliest days of Islam and even the pre-Islamic period which are already lost, due to an aggressive demolition campaign being systematically carried out by the Saudi authorities over the past few decades:

Historic Mecca, the cradle of Islam, is being buried in an unprecedented onslaught by religious zealots.

Almost all of the rich and multi-layered history of the holy city is gone. The Washington-based Gulf Institute estimates that 95 per cent of millennium-old buildings have been demolished in the past two decades.

Now the actual birthplace of the Prophet Mohamed is facing the bulldozers, with the connivance of Saudi religious authorities whose hardline interpretation of Islam is compelling them to wipe out their own heritage.
[…]
A Saudi architect, Sami Angawi, who is an acknowledged specialist on the region’s Islamic architecture, told The Independent that the final farewell to Mecca is imminent: “What we are witnessing are the last days of Mecca and Medina.”

According to Dr Angawi – who has dedicated his life to preserving Islam’s two holiest cities – as few as 20 structures are left that date back to the lifetime of the Prophet 1,400 years ago and those that remain could be bulldozed at any time. “This is the end of history in Mecca and Medina and the end of their future,” said Dr Angawi.

That was three years ago – the situation now is even more precarious. Aside from the Grand Mosque expansion, there are private plans to construct an astonishing 130 skyscrapers in Mecca as well:

The holiest city in Islam is to get a Â£6bn facelift, it was announced yesterday, with homes and hills being flattened to make way for hotels, apartments, shopping malls and transport facilities for pilgrims. Six development projects ordered by the Saudi monarch, King Abdullah, will transform Mecca, which struggles to accommodate the millions of Muslims who pour into the city every year to perform hajj.

The biggest change will be to the courtyards of the Grand Mosque, which can hold at least 100,000 worshippers during prayer times. An ambitious expansion programme has led to the demolition of 1,000 properties in the immediate Shamiya area and Saudi authorities have set aside an estimated Â£80m to compensate the homeowners.

There will also be a new residential district to the south-west of the mosque. Construction firms have begun to level hills to create a 230,000 square metre area that will include high-rise apartments and air conditioned prayer facilities for up to 120,000.

A new ring road, four kilometres (2.5 miles) long and 80m wide, will ease congestion and link to the Jeddah highway, while a project to the south of the mosque will increase prayer space from 1,170 to 30,000 square metres and provide parking space for more than 1,000 cars.

But Irfan Al Alawi, the founder and former executive director the Islamic Heritage Research Foundation, said: “It’s the Manhattanisation of Mecca. The Saudis want to build skyscrapers. The worry is that as they level hills and mountains they will destroy sites of cultural interest.”

Related: discussion about “Meccahattan” at Talk Islam. Also, John Burgess at Crossroads Arabia has numerous posts on the battle between history and zealotry beyond just Mecca, noting threats to the Cave of Uhud (where the Prophet SAW took refuge during the battle of the same name) and Salae Mountain which played a role in the Battle of the Trench. It is important to note that there are forces within Saudi Arabia, including within the royal family as well as the general public, that are opposed to the wholesale destruction of Islamic heritage. However, where the zealots may fail, the developers may yet succeed.

read next post
"I, Barack Hussein Obama, do solemnly swear..."
archives most recent
More from Beliefnet and our partners
previous posts