I’ve praised president Bush for emphasizing that the war on Terror should not be construed as a war against Islam, but the Republican Party has been enthusiastically waging a war against muslims.Even muslims who are members of the Republican Party are potential targets – consider the case of Rima Sinclair, a Republican in Colorado who ran in the primary for Colorado House District 6. Ms. Sinclair wrote the following editorial about her experience with her own party, and has graciously given me permission to publish it here on City of Brass.

By: Rima B. Sinclair

For twenty-first century America, election 2008 has brought back to the
surface issues that many believed to be things of the past. Once again,
the color of one’s skin, or one’s faith, have been misguidedly
presented as considerations to use when evaluating a citizen’s
eligibility to take part in the highest endeavors of our society. Here
is my story:

On  March 1, 2008, the Republican Party Assembly elected me to run for
the Colorado House of Representatives. I felt honored by this chance to
give back and appreciated the great responsibility I just committed to
uphold. I believe in the basic values that made this nation great:
upholding the Constitution, individual freedom with responsibility, and
small government with prudent tax and spending policies. An integral
part of my beliefs are values like equality, justice, freedom of
religion, the sanctity of human life and that our responsibility toward
children does not end at birth. It means giving the young a fair
chance at becoming contributing members of society.

Soon after my nomination, a certain segment of the Republican party
made it known that they rejected the nomination due to my ethnic and
faith background. They claimed that I was not a “Real” Republican and
launched an intensive “character assassination” campaign, in which I
was labeled a “radical” and “terror apologist.” My Republican opponent
claimed that my intentions “may not always have been so benign towards
America.” He invited volunteers to join him to defend the “home front
in the War on Islamist Terror.”

Regrettably, the Republican leadership refused to address the problem.
The Colorado Republican Chairman, dismissed the claims as the usual
“campaign business.” The Republican US Senate Candidate announced  his
unqualified endorsement of the abuser. Others, like the Colorado former
Speaker of the House went so far as to circulate e-mails that accused
me of being an “Islamist mole” and a “strong threat” to Western
civilization. My attackers were invited to bring forth any evidence to
sustain their charges, but none did.

“She should be jailed for treason” and “The wombs of Arab women are
bomb factories,” said the letters in multiple media outlets. To no
avail, I pleaded with party officers to urge a minimum standard of
decency and truthfulness in campaign politics. The response was that
the attacks had not reached the “extreme or outrageous” level which
would warrant action to “arbitrate campaign rhetoric.” Instead, I was
warned to drop out of the race or face a scandal that would so
completely ruin my reputation that I “won’t find anyone in town ” to
talk to me. Needless to say, I felt relief when the so-called “real”
Republican won the Primary election. Only God knows what other
trumped-up claims they would have made, if I had won.

The onslaught of ethnic and faith attacks for political gain have
marked election 2008 as the dirtiest that I have witnessed. It is not a
surprise that similar Machiavellian rhetoric is now being employed
against Barack Obama. The agents of hate have been successful in
whipping-up enough anger to precipitate calls of “traitor”, and “kill
him.” Recent history has demonstrated the horrible consequences of such
irresponsible agitations. The late Israeli prime minister, Yitzhak
Rabin, was repeatedly labeled “a traitor” just before he was murdered
by a right-wing Jewish zealot.

Nonetheless, Sarah Palin found it defensible to brand certain parts of
the country as not “Pro-America.” The wholesale labeling of a large
segment of Americans as harboring “questionable” patriotism was another
abominable example of this year’s gutter politics. No wonder some
Republicans are in need of the services of a Savior Plumber. The drains
have backed-up and they hope that “Joe” can snake out the Grime.

I grew up in a country where I could not vote and where women are often
treated as second class citizens. Twenty years ago, I came to America
inspired by the ideals of freedom, equality and the rule of law. In
Colorado, I have built a business, I married a wonderful husband of my
own choosing, I do not have to fear repressive authority and can seek
to participate in government. Immediately after becoming a naturalized
citizen, I joined the Republican Party because I felt that it best
safeguards these blessings of liberty that exist in America and nowhere
else.

Sadly for America, the right-wing demagogues remain largely
unchallenged despite the personal and destructive tactics they have
used against Americans who do not fit to their definition of the
“Ideal” citizen. Perhaps next, they will up the ante, with charges of
treason that targets whole groups of Americans. For the sake of
Freedom and Democracy, this treacherous campaign must be stopped.

Rima Barakat-Sinclair is Denver resident and an American-Arab Muslim
citizen. She is a frequent speaker and an advocate for greater
participation in civic affairs and interfaith dialogue.

I think Ms. Sinclair’s story speaks for itself. I applaud her for her courage and desire to serve her country, and her party. More information about Ms. Sinclair is at her campaign website. I for one hope she decides to run to represent her district again in the future – and I hope she stays a Republican, because it’s people like her who will reclaim her party from the madness that infects it today. Perhaps, ironically, Obama’s victory next Wednesday will pave the way. 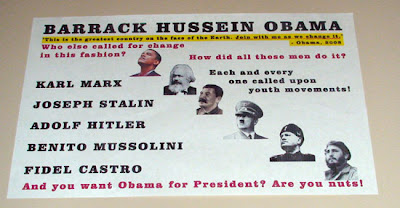