European mosques and freedom of religion

The muslim world, especially the Middle East, is rightly chided for its lack of religious tolerance. One excellent barometer of tolerance is whether minority religions are permitted to construct houses of worship. While some countries in the ME like Jordan are relatively liberal in this regard, others are severely intolerant of competing faiths. A good example is in Saudi Arabia, where churches remain outlawed, despite recent outreach from the Vatican and evidence of churches in antiquity.

Of course, the muslim world is still third world in many respects, on the lagging end of the global wave of liberalization and human rights. You would expect that the more enlightened (and Enlightened) West to score better on these basic issues of religious freedom. Unfortunately, looking at Europe (the cradle of Western civilization) as a case study, we find that religious tolerance (as defined above) hardly fares any better than the Middle East, with success stories as well as outright failures. Consider three continental case studies – Italy, Switzerland, and Germany.

In Italy, the far-right Northern League party (allied with PM Berlusconi) has proposed legislation to severely curtail the construction of new mosques. The author of the legislation, Andrea Gibelli, defends the need for the restrictions as follows:

Gibelli’s bottom line was that building mosques in Italy at the current
rate of expansion was a form of cultural colonisation. He said mosques
“are often places of cultural indoctrination, sometimes linked to
international terrorism.” They get in the way of Muslims integrating
into Italy’s Catholic culture, he said. Anyway, he finally said,
Muslims don’t really need them as the Koran states that they can “pray anywhere.”

Of course, such laws actually do more harm to “cultural integration”, by clearly telling immigrants that they are Others regardless of their loyalty to the state or how much they have contributed to their society by virtue of their labor:

The Northern League has “made life difficult for the Islamic
component (of immigrants in Italy) in every sense and especially with
regards to places of worship”, the president of the Islamic Cultural
Istitute of Milan, Abdel Hamid Sha’ari, told Reuters.

Not just recent or illegal immigrants feel unwelcome, but also
established Muslim residents like Jihad Amro, who said: “I have paid
taxes for 17 years but I still don’t feel at home.”

“There are still situations where I feel uncomfortable or strange
because they (Italians) don’t see me as someone who is integrated,”
Amro, a Palestinian, told Reuters TV in Rome.

The League’s anti-Muslim protests have often made headlines, such
as when Roberto Calderoli, now a cabinet minister, walked his pet pig
on a proposed mosque site to defile the soil or wore a T-shirt of the
Prophet Mohammad, triggering riots in Libya.

Even a planned “Islamic center” in the Tuscan region, which will be funded entirely from the local muslim population, is meeting resistance, despite support from the local authorties, suggesting that antipathy to muslims is deeply engrained.

In Switzerland, the controversy centers on minarets:

A group of right-wing Swiss politicians has launched a campaign to ban the construction of minarets, claiming they are a symbol of power
and threaten law and order.

The attempt to launch a national referendum on minarets has triggered widespread criticism but also attracted some support.

The anti-minaret movement is more prevalent in smaller Swiss towns where the local muslim communities want to build new mosques. In the big cities (Zurich, Geneva) there are large mosques with minarets that would not be affected by the proposed law, which would actually be a constitutional amendment. The complete text of the amendment? Six words: “The construction of minarets is forbidden.”

However, the Swiss government has not seen fit to let the anti-minaret proponents go unchallenged. The federal government issued a 49-page report outlining in exacting legal terms why such a ban would violate the existing Swiss constitution (which is why it is proposed as an amendment rather than a law, note), as well as international human rights standards. The summary of the report is here and in many ways is a blueprint for those who defend religious freedom against right-wing extremist intolerance.

In Germany, there is no legal attempt at outlawing mosques or minarets, and in fact the muslim community is poised to embark on an ambitious round of projects, ranging from a mega-mosque in Cologne to smaller, but utterly breathtaking, projects. The opposition in Germany seems to be driven more by competing religious authorties rather than right-wing political groups (which do exist but are smaller and less powerful, given Germany’s greater political complexity and diversity). Consider the reaction to the Cologne project:

The plan calls for a mosque with prayer space for 2,000, a high
glass and concrete dome and two tall minarets in the Ottoman Turkish
style. It would be flanked by DITIB offices.

“It would not be the biggest mosque in Germany, but it would be the
biggest Muslim centre,” Alboga, DITIB’s official for inter-religious
dialogue, said. “There are 120,000 Muslims in Cologne, the largest
number in any German city.”

The complex got approval from City Hall but met with growing
criticism from Christian leaders and a small far-right group, which
rallied about 150 people to protest against it last month.

Cardinal Meisner said the mosque would change the skyline of
Cologne, a city crowned by its massive Gothic cathedral, even though
the minarets would stand far away in a leafy suburb.

Mainz Cardinal Karl Lehmann, head of the German Bishops Conference,
upset Muslims by saying Germany should not show “uncritical tolerance”
and treat Islam like other religions.

As the article notes, Islam in Germany is “here to stay” and there are over 200 mosque projects being pursued. Some of these are unbelievably outstanding in terms of beauty and architectural design, for example this “broken eggshell” design intended for a Cologne suburb: 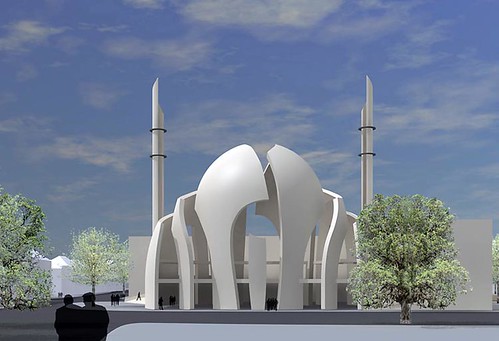 or this imposing, minaret-less design for a project in Berlin: 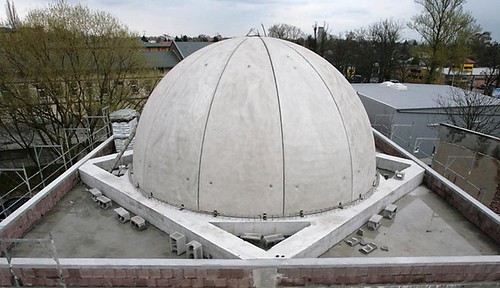 These bold designs are a deliberate expression of identity for German muslims, asserting their presence with “confrontational architecture“:

The real issue of debate, however, will be the fact that, stone by
stone and minaret by minaret, Muslims in Germany want to become more
visible — they are no longer content to have their places of worship
largely hidden from public view. In architectural terms, they want to
be part of the cityscape in a way they have never been before.

These exmaples demonstrate a great deal of diversity in terms of tolerance level across Europe, with some countries more backwards than others. However, Der Spiegel does note that the underlying tensions are universal, a conflict between the native European culture and the post-colonial immigrant populations who are expected to “assimilate” but who also remain second-class citizens:

The numerous attempts to block construction illustrate how a smoldering
conflict that otherwise remains hidden from view is being openly waged
in the field of architecture. Wherever you go, the pattern is almost
identical: First there are complaints about encroachments on the urban
environment and haggling over possible locations and the height of
domes and minarets — whether they can be 15, 20 or 55 meters. Or, as
is the case in Munich, it might just be about aesthetic competition
with a nearby church. And, then, the debate moves to the underlying
issue: the locals’ fear of preachers of hate, terrorist attacks, jihad
and the accusation that, with every minaret it builds, Europe is prostrating itself further to the power of Mecca.

…
You can’t first accuse Muslims of barricading themselves in back rooms and of
refusing to integrate themselves into society
and then criticize them — in areas where they’re been living for two
or three generations — for wanting to build proper houses of worship.
The fact of the matter is that they are putting themselves out in the
public realm. Moreover, having an “invisible” minority culture that the
majority considers practically inscrutable has the much more dangerous
potential of causing problems than does having a minority culture whose
visibility actually lends it a rather ordinary, everyday feel.

It’s precisely that ordinary, everyday Islam that these mosque projects will promote, and will serve the self-interest of both muslims and non-muslims alike. The backlash is less a failure of religious tolerance and more a manifestation of simple fear and anti-immigrant prejudice.