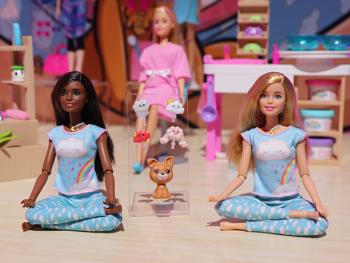 Christian author Yasmeen Suri is sounding the alarm for Mattel’s new Yoga Barbie, which she believes is out to possess children and spread Satanism.

According to Suri, the doll is a tool of the devil that will indoctrinate children into Satanism. “Satan always comes as appearing innocent,” she warns in a Facebook post. The doll comes with 5 guided meditations which Suri believes it promotes a darker evil as the purpose of the meditation is to invoke a Hindu deity from a spirit realm.

It is suggested that the meditations are designed to open up your third eye chakra and allow you to connect with the spiritual realm…once opened, this allows for demonic possession. Suri warns parents they may not realize that their innocent children will eventually become depressed and even possibly suicidal after becoming possessed by the doll.

“Satan is after the children. He wants to use them and indoctrinate them for his glory. Then, when he is done, he will destroy them.” Suri continued in her post. The author encourages Christians to remain true to their values and not practice eastern religion and for parents to clean out any “demonic attachments” from home.

This is not the first time Mattel has come under fire for Barbie. Secular objections to allowing children to play with the popular doll include her body proportions are unrealistic and harmful to young girls’ body image, as well as the suggestion that playing with Barbie cultivates a fascination with fashion and material possessions. Mattel, for decades, has chosen to produce a toy that projects an unattainable image for American girls. Christians have called Barbie out for representing oppressed women throughout history and promoting a lifestyle of glamour and perfectionism. A real-life Barbie would have bones so frail that it would be near impossible for her to walk and would barely have enough room for half a liver.

Christian parents have been warned for years to stay away from the devilish doll as she is harmful to spiritual growth. Mattel is constantly getting slammed for not producing a ‘Christian Barbie’ and received backlash when they introduced a Barbie that honored the Muslim Gods. It seems the company is out to promote all
religions equally, excluding Christianity. So that brings us back to the original discussion, why is that happening. Is Mattel out to promote Satanism as they seem to be pushing the dark occult agenda?

Barbie is used as a teaching toy, but what path is she sending children down? Is she seen sending girls down a path to virtuous womanhood and glorifying God? You don’t see children learning Scriptural truths. You don’t see children learning anything with substance to it. Bible stories are hardly ever if ever, found in Barbie’s books. The focus is on fun, fashion and makeup with just a splash of career aspirations, and apparently now Satanism.

Parents should always be cautious of what’s in their children’s toy boxes as the devil wears many disguises.

Briana lives in Richmond, Virginia with her wonderful children and partner. She is a skeeball and coffee enthusiast and loves to unwind with a good book. After being raised Catholic she chose to go on a spiritual journey of self-discovery and enjoys embracing all that is possible.
read next post

Percent of Americans Who Believe in God Reaches New Low

Most U.S. adults believe in God, but the 81 percent who do so is down six percentage points from 2017 and is the lowest in Gallup’s trend. Between 1944 and 2011, more than 90 percent of Americans believed in God. Gallup’s May 2-22 Values and Beliefs poll finds 17 percent of Americans saying they do […]

Cross Still Standing Among Ruins of Church: A Sign from God?

A church in Texas was burned to the ground, but when the rubble cleared, a cross stood tall. Pastor Sonny Smith of the Balsora Baptist Church says the standing cross was a “sign from God.” “To me, that was a sign from God, saying, ‘Don’t worry, I’m still here, and I’m going to lead you […]

Earlier this year, a powerful scene unfolded: a North Carolina trooper pulled a driver over for speeding. Instead of giving them a ticket, the officer prayed with a man fighting cancer. A photo of the encounter has since gone viral, showing North Carolina State Highway Patrol Trooper Jaret Doty leaning into a car as he […]

Is Tomorrow's Strawberry Supermoon a Sign of the End Times?

The strawberry supermoon that will be visible this week has some people wondering if it might be a sign of the end times. What is a supermoon? A supermoon is a full moon that will be much larger than a typical full moon as it’s much closer to the earth. Supermoons usually occur when the […]