Near-death experiences are common. What’s incredible about these stories is that they are remarkably similar between all individuals who report to have them.

Being able to see and communicate with those on the other side seems unreal. Medically speaking, near-death experiences should be impossible. However, thousands of people have shared that they have journeyed to the afterlife. They have also expressed that they have communicated with those who are no longer with us.

Anita Moorjani was one of those people. For her, death was not as frightening as it was liberating.

Moorjani was close to death but came back to life. She was reborn in several remarkable ways.

“People come and ask me, how was it? What was it like? And I tell them it was wonderful,” Moorjani said.

Moorani’s story began when she was diagnosed with Hodgkin’s lymphoma back in 2002. This is a cancer of the lymph nodes that impacts the immune system.

At the time, Moorjani’s life was extremely stressful. She worked in corporate marketing and was always anxious about her job and the future. She was also fearful about becoming ill, so she took her health seriously. It was the fear of anxiety that birthed her cancer, Moorjani said.

Moorjani went through countless treatments to try and beat her cancer. It appeared she would lose her battle when egg-sized tumors grew around her neck. Eventually, her breathing became dependent on an oxygen mask.

Four years after her initial diagnosis, Moorjani slipped didn’t wake up. She has slipped into a coma.

“I could hear everything that was being said around me,” Moorjani said. “I heard the doctor tell my family that I would most likely not make it, as my organs were no longer functioning. I could feel my husband’s hands as he held mine.

Moorjani shared that she could see her body lying on the hospital bed. She could also see outside of her room. This included a vision of her brother getting on a plane to see her in the hospital.

“It is difficult to describe. But it was like I left my body, and my consciousness had expanded,” Moorjani said. “I was everywhere, in a God-like state, where I could see my loved ones and feel the presence of other souls.”

While many people express seeing a white light or going through a bright tunnel, that wasn’t the case for Moorjani.

“There was no white tunnel effect in my case,” Moorjani said. “I was told the tunnel effect happens when you die suddenly, like in a car accident, where your soul gets sucked out. I died gradually, and so my experience was different.”

She also expressed that she felt an incredible sense of peace.
“When I went into this other dimension, I felt an overwhelming sense of love and peace,” Moorjani said. “I felt no pain. I found out my purpose in life and what I must do. I realized that the solution to my cancer was always within me.”

At that moment, she came back to life, and she knew her purpose was to recapture her life. What happened next can’t be medically explained. Within four days, 70 percent of her cancer had cleared. After five weeks, the entire disease was gone from her body. Specialists could only call this case a miracle.

Dr. Peter Ko, an oncologist from the U.S., traveled all the way to Hong Kong to meet her in person after taking an interest in her case. He had gone through all of her medical records, studying them in a great deal. He told her she should be dead.

“Of course, there are many skeptics, and many ask me why I am so lucky to come back and be healed, and I tell them, I am nothing special,” Moorjani said. “We all have this inner strength, and I am here just to remind you of it. It is up to you to take what you need from my experience. Miracles are possible.

Listen to her powerful TedTalk “Dying to Be Me” in the video below. 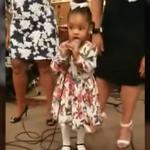 Toddler Sings ‘I Came to Tell and Call Jesus,’ Moves Church to Tears
archives most recent
Get the Christ News Today Bible Verses email newsletterpowered by ArcaMax
More from Beliefnet and our partners
previous posts