Faith Leaders React to Capitol Siege: “This is Not the Way of Jesus”

World pastors and faith leaders are calling Christians together in prayer after President Donald Trump’s supporters stormed the U.S. Capitol building. The effort stalled the certification of Joe Biden as the next president.

Photos and videos have been shared online and in the news depicting protestors and rioters vandalizing offices, smashing in windows, and looting the galley. Some were even to briefly take control of the Senate chamber. At least one person has been confirmed killed during the siege inside the building. Three others also lost their lives as a result of “medical emergencies,” according to the Metropolitan Police Department.

Franklin Graham, a star in the evangelical community, sent out a tweet that said: “I am deeply saddened by what took place in our nation’s capital today. Our country is in trouble. We need God’s healing and we need God’s help. Pray for peace and the protection of our nation. Let’s come together — on our knees.”

This sadness was echoed by Matt Chandler, who is the lead pastor of the Village Church and president of the Acts 29 church planting network. In an Instagram message, he wrote that “Nothing breaks my heart more than seeing Jesus’ name on the flags waving there. This is not the way Jesus lays out for us”. He continued in a video, saying “That sickness is sin. And we’re in desperate need of a savior, but it is not the savior of those flags waving at the Capitol right now that have our King’s name.”

“We’re in desperate need of an outpouring of the Spirit of God,” he concluded. “Will you join me as we pray and ask God to help heal our nation, pour out His Spirit on our nation, and then to ultimately keep those safe who are in harm’s way.”

Pastor Tony Evans also condemned the events in a lengthy Twitter thread. In one message he wrote, “America is undergoing the passive wrath of God which takes place when His standards are compromised (Romans 1:18-32.) The result is chaos … conflict and lawlessness. Only a radical return to God by His people will change this. The answer to saving America is not in the White House — it is in the church house.”

As the story continues to unfold, we encourage continued prayer for safety and peace. 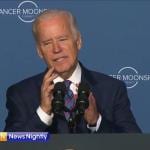 Is the Biden Era a Second Coming For Religious Liberals?
archives most recent
Get the Christ News Today Bible Verses email newsletterpowered by ArcaMax
More from Beliefnet and our partners
previous posts

Pastor Greg Laurie, the senior pastor of Harvest Christian Fellowship in California, addressed those who are concerned the COVID-19 vaccine might be “the mark of the beast.” Laurie did his best to put any spiritual concerns his congregants had to rest with a recent sermon on the book of Revelation. He also shared the message […]

Long Hollow Baptist Church in Hendersonville, Tennessee, had seen its lowest attendance following a spike in COVID-19 infections in the area. Robby Gallaty, the church’s senior pastor, felt that things worked against what he thought God was instructing him to do, FaithWire reports. “It was like all the water we could put on the offering,” […]