Franklin Graham: ‘I Turned My Back on God,’ Opens Up About Past Faith Struggles

The son of the late Rev. Billy Graham recently opened up about his past faith struggles and how it was ultimately able to find God again.

In a recent interview with Charlotte Pence Bond, host of Edifi’s “Doubting It” podcast, he shared that he wandered a bit on his faith journey in his early years of life.

When he was younger, Graham struggled with God’s role in his life. At the time, instead of placing faith at the center of his life, he decided to serve himself, Christian Post reports.

“I just didn’t want God running my life. I wanted to run my own life. I wanted to have fun. I went to church, because I was expected to,” Graham said. “As I got older in my teenage years, I was more interested in pleasing myself. I just turned my back on God and tried to serve myself.”

He discovered something big – that the more he looked to place himself at the center, the more he was unhappy. It took a lot of deep reflection, but Graham eventually came around. Only after this self-reflection was he able to restore his faith in God and walk in his father’s footsteps.

“One night, I just got on my knees and I said, ‘God, I’ve sinned against you and I’m sorry,’” Graham said,

Graham shared that he asked God to take the pieces of his life and use them.

“I still make plenty of mistakes, but when I prayed that prayer it was sincere,” Graham said.

From then on, he was committed to living a life of faith and devotion. Following his moments of struggle, he never doubted that “God is real” or whether “Jesus Christ is God’s Son.”

Today, he encourages young people to walk in the faith. He believes Jesus can make transformational change in hearts and lives, just like he did in his own.

“I would encourage young people … start every day in the word of God,” Graham said. “Prayer allows us to go right into the presence of the king of kings, the Lord of Lords … we can go straight to God.” 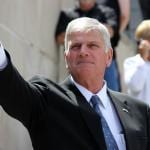