A stabbing at Grace Baptist Church in San Jose, California left two people dead and three others injured. The church congregation and the greater Christian community are mourning this tragic loss.

In a press statement Monday, the city’s mayor called the stabbing “horrific”.

“Our hearts are torn for the victims and their loved ones in last night’s horrific stabbing at Grace Baptist Church on 10th Street. We have lost two community members, and we pray for the recovery of the three others seriously injured in that attack. SJPD has arrested a suspect, who remains in custody. We will keep the community updated as SJPD releases more information,” San José Mayor Sam Liccardo said.

The San Jose Police Department arrived at the church Sunday night after a call was reported to 911. When the police arrived, they found one victim already dead. Another victim later succumbed to injuries at the hospital. Three other male victims remail hospitalized in serious condition but are stable.

The police have someone in custody, but the investigation remains ongoing. Religious services were not being held at the time of the stabbing, but the building was being used as a homeless shelter. 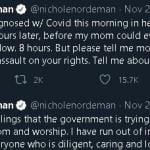