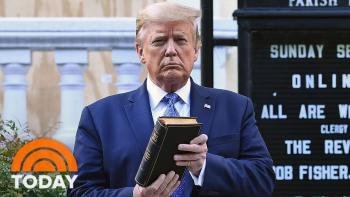 Is the Trump administration saving Christianity? Supporters of Trump seem to think so, but former Obama faith adviser Michael Wear is not buying it. Instead, Wear thinks Trump’s using Christianity as a ploy to influence voters and help his re-election campaign.

In a recent tweet, Eric Trump made the claim that his father was “literally saving Christianity”, but Wear is calling that “blasphemous” in a new op-ed piece on USA Today.

“President Donald Trump’s campaign is making a closing argument that he has “saved Christianity,” a blasphemous claim that in reality is aimed at getting people of faith to save him.”

“The truth is, Donald Trump can’t win without the overwhelming support of Christians —support he does not deserve,” the article continues.

Eric Trump also made claims that the Democratic Party was becoming the “party of atheists” who attack churches, adding “there’s a full out war on faith in this country by the other side.” Wear, though, argues that the right is not holding their own party to Christian standards.

“Yet, Trump supporters arguing that Christians must support him often want us to believe Joe Biden is responsible for every statement ever uttered by anyone on the political left, while they fail to hold Trump accountable for his own actions,” Wear continued. “Trump has evaded accountability for long enough.”

Wear also argues that Trump actually worsend Christinaity, rather than make it stronger.

“Like much of his presidency, his approach to Christians weakens rather than strengthens them,” Wear stated. “And he shows exactly how much he values faith when he lumps it alongside petroleum and firearms.”

“The effects of Donald Trump’s vulgarity, incivility, and cruelty have not stayed confined to politics, but have affected our culture, our families and our churches. While the toxicity of our politics won’t be completely excised once Trump has left the White House, we can’t even hope for healthier politics while he’s still president.”

Wear ends the piece by saying he and many other Christians should not “save” Trump’s campaign this time around.

“But when Donald Trump asks Christians to save him at the polls once again, I know I will join millions of other Christians with a different answer: not this time, Mr. President. Not our vote. Not our faith.”