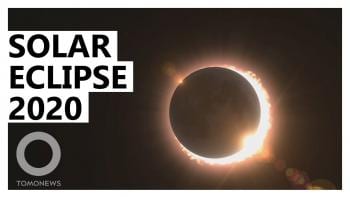 Less than two weeks after the “ring of fire” summer solstice eclipse, Earth had another significant eclipse on a historical date. A lunar eclipse happened on July 4th, America’s Independence Day, and some believe it a sign of something much more sinister.

Lunar eclipses typically happen two weeks after or before a solar eclipse. They are much more visible to the world than solar eclipses. Because the full moon was covered by the sun in July, it was referred to as a “buck moon”.

Christian evangelist Paul Begley says it’s something else entirely – a blood moon. Begley has become a well-known conspiracy theorist in the community from talking about the coronavirus pandemic, locust swarms in Africa, and other catastrophic events from this year.

Begley said the “ring of fire” eclipse on June 21st was one of three impending signs of Armageddon, with the July 4th moon being the second one. He’s used the Bible to back up his claims.

“Guys, we are in end time plagues,” he said in a recent video on his YouTube channel where he has more than 335,000 subscribers.

“The midnight Blood Moon over American on the Fourth of July is certainly a prophetic sign,” he said.

He believes this weekend’s lunar eclipse mirrors the “blood red moon” mentioned in the Book of Joel, the Book of Acts and the Book of Revelation.

The Book of Joel 2 reads: “I will show wonders in the heavens and on the earth, blood and fire and billows of smoke. The Sun will be turned to darkness and the Moon to blood before the coming of the great and dreadful day of the Lord.”

The Book of Revelations similarly describes a red moon: “And I beheld when he had opened the sixth seal, and, lo, there was a great earthquake; and the sun became black as sackcloth of hair, and the moon became as blood.”

One is an ordained pastor in Brooklyn, the other a single mother and children’s book author in New Jersey. Both drive for Lyft. Both share the word of God as roving preachers. Pastor Kenneth Drayton and Tomika Reid try to inspire passengers through spiritual guidance on the road as part of what they see as […]

Fox News anchor Harris Faulkner says she’s witnessed “literal miracles” and is on a “divine assignment” from the Lord to tell others what she has seen and heard. Faulkner was born into a Christian home in October of 1965, where, at a very young age, her mother knew she had more than just a knack […]

A Look at Life 30 Seconds After the Rapture

End times expert Jeff Kinley and co-host Todd Hampson speculated openly about what the immediate effect of the Rapture will be on their “Prophecy Pros Podcast.” Kinley stated that 30 seconds after the Rapture will be a time of “shock, confusion, panic, terror and chaos” for nonbelievers. “You’re in a mall,” he said. “You’re at […]

Why is Tim Tebow so Vocal About his Faith?

With the release of his new devotional, Mission Possible, Tim Tebow continues to make the rounds speaking about the importance of being bold in faith. Speaking with CBN Faithwire, he stated that sharing his faith is an act of love, saying, “I think it’s the most loving thing that we could do. If you really […]