Millions of American’s observed Palm Sunday this weekend from the comfort of their homes, but some churches decided to keep their doors open despite stay-at-home orders put into place due to the COVID-19 pandemic. While many churches have opted to stream sermons on Facebook and YouTube, other churches are calling their members to still come in. These pastors believe the law shouldn’t stop them from spreading the Word of God.

“We’re defying the rules because the commandment of God is to spread the Gospel,” Louisiana pastor Tony Spell said in an interview with Reuters.

Spell held three services in his 1,000-member megachurch, Life Tabernacle, in Baton Rouge yesterday. He has already been hit with six misdemeanors for defying the law.

“The church is the last force resisting the Antichrist, let us assemble regardless of what anyone says,” he said.

Spell’s church isn’t the only one fighting back. Kelly Burton, the pastor of Lone Star Baptist Church in Lone Star, Texas, wrote in a post on Facebook: “Satan’s trying to keep us apart, he’s trying to keep us from worshipping together. But we’re not going to let him win.”

Burton’s church has been holding services in the parking lot, calling it “Church on the Lot”. For Spell and others, they believe the public health orders are a threat to religious freedoms and constitutional rights.

Clusters of outbreaks of the coronavirus have been linked back to several churches already. In California, Sacramento County officials said on Friday that they have identified one evangelical church that has a cluster of 71 positive cases. They offered few details but said that while the church itself is closed, church members continue to gather in fellow parishioners’ homes.

Some churches are implementing social distancing techniques, saying they will keep the congregation six-feet apart and wipe down everything between services. However public officials say this is not enough, and that churches need to close their doors for the time being to really stop the spread of the virus. Some churches have been given “Notice of Public Nuisance” warnings due to refusing to close.

Pastor of Godspeak Calvary Chapel, Rob McCoy, received such a notice and still decided to hold communion for Palm Sunday. “It’s very important theologically that communion not be taken alone,” said McCoy. “What we are doing is exercising our inalienable rights. Communion is non-negotiable for us.”

“Simply put, no, we’re not going to obey it,” Dean Broyles, attorney for McCoy’s church, told Reuters. “The virus does not suspend our constitutional rights, the right to assemble, freedom of religion and freedom of speech.”

“We’re much safer than a Walmart or grocery store,” said Broyles, who is also president of the National Center for Law & Policy, a legal advocacy group based in San Diego. “Think about it, you’re crammed into (store) aisles inches apart from other shoppers. Here we’re sitting six feet apart.” 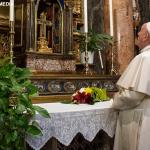 A 3D scan shape of a boat found by researchers reportedly matches the Biblical description of Noah’s Ark.

The world-renowned Pastor, author, and film-producer has inspired millions with his ministries.