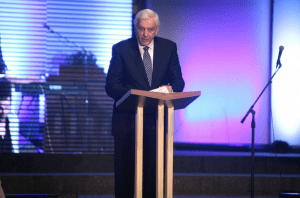 David Jeremiah, pastor of Shadow Mountain Community Church in California, is concerned about where the modern church is headed. In an interview with The Christian Post about his new book, he expressed “The Church is coming under attack; it’s forgotten what the Church is supposed to be.”

“We’re not an entertainment service; we’re not here to see how close we can get to what the world does. But there’s so much of the world in the Church and vice versa that we can’t tell a difference. We have to hold to the truth. We have to get nourished. If it’s not happening, you’re a social organization and not a church,” he continued.

It’s true that there is a national decline in church attendance, but Jeremiah believes that far too many churches are now becoming “obsessed” with staying relevant and getting people through their doors to a fault.

“There’s an incredible motivation on the part of everyone to be successful, and a lot of times people program their churches to see how many people will sit in the pews on Sunday,” he said. “There’s nothing wrong with getting people there, as long as you share the Gospel. But there’s no glory in just a number.”

“Don’t worship at the attendance altar,” Jeremiah advised. “A lot of good things happen in churches when there aren’t huge numbers but the pastor has prepared a good message and there’s worship. We get off on this thing that we have to be bigger than the guy down the street and how to get more people in the building. When you’re focused on that, you’ll never preach anything that’s controversial and you’ll always be trying to figure out how to get more people to come.”

Furthermore, many churches are abandoning traditional traditions in favor of more progressive entertainment, such as praise bands instead of hymnal books, to try and attract a younger audience. Jeremiah says this is the wrong approach and is doing the opposite of what churches are intending.

“Here in California, we see interest on the part of millennials and younger for the Bible and for truth. Most of the time, we see statistics about how people are leaving the Church, but in many respects, young people are demanding more truth, more teaching, and less entertainment. They’re not interested in shallow expressions of religion.”

Woman "Died" For 27 Minutes, Writes Remarkable Note About Afterlife When She Awakes
archives most recent
More from Beliefnet and our partners
previous posts