Jeanette and Bruce Empey feared for their lives as a raging fire broke out near their home in Idaho Falls. The fire looked like it was going to devistate their entire ranch, so the family prayed for divine intervention.

“My husband and son went up to the ranch Monday night after learning the fire had jumped the Bone Road and was heading toward our place,” Jeanette said.

“Firemen showed up and told my husband the cabins were going to be a loss and for safety reasons, he should leave.”

Despite these warnings, the family contineud to pray. The fire consumed more than 50,000 acres, but the Empey family’s home was completely left untouched in what they believe was a miracle.

“There is an oasis in the middle of all this burned land,” Jeanette explained. “To me – that is a miracle.”

While the fire was raging around them, Bruce took photos of the scene. They noticed an angel-like, mysterious figure show up right above their property and snapped a few photos. Jeanette has named the photo “The Fireman’s Guardian,” and it’s gone viral since she shared it on Facebook.

“Everything is burned except for around the cabins,” Jeanette said. “I know the Lord was helping.” 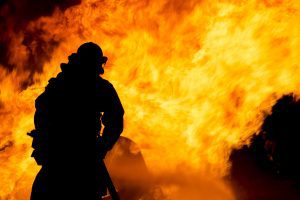 “The Odds Were Against Us, God Was Not:” Bibles Survive Massive Fire Untouched
archives most recent
Get the Christ News Today Bible Verses email newsletterpowered by ArcaMax
More from Beliefnet and our partners
previous posts