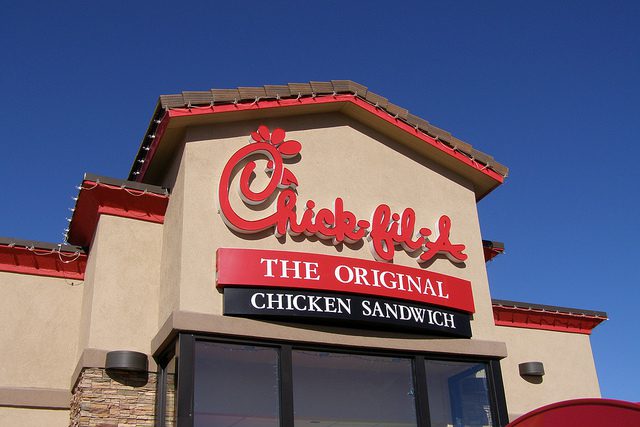 It is a strange situation. One of the most popular fast food chains in the country is not welcome in the country’s most populous city because the owners of the fast food chain openly practice their faith, which is the most common faith in the country. This sounds like something out of either a bad joke or a dystopian novel, but this is really taking place in America today. According to “The New Yorker,” Chick-fil-A does not belong in New York City because the owners of the fast food chain dare to actually practice their Christian faith rather than keeping it quietly to themselves.

Dan Piepenbring wrote in “The New Yorker” that Chick-fil-A was “infiltrating” New York City with an “ulterior motive.” Piepenbring describes how the chain’s headquarters are “adorned with Bible verse and a statue of Jesus washing a disciple’s feet.” He goes on to mention that the restaurant chain is closed on Sundays. This is listed as if these traits should inspire horror in readers. The most damning thing of all to Piepenbring, however, is that the CEO, Dan Cathy, opposes same-sex marriage. It is for this reason, Piepenbring implies, that some people protested Chick-fil-A’s first restaurant opening in New York. There was, however, no such protest this time against the “proselytism” that Piepenbring claims “thrums below the surface” of Chick-fil-A and its “suburban piety.”

In addition to daring to be Christian, Chick-fil-A apparently over uses the term “community.” Piepenbring states that Chick-fil-A’s “emphasis on community…suggests an ulterior motive.” Part of the reason that Chick-fil-A is supposedly not actually community friendly is that their corporate purpose statement still contains the words “to glorify God.” According to this “The New Yorker” article, Chick-fil-A’s Christian influence and emphasis on community makes it a “creepy” addition to the Big Apple.

Piepenbring also goes on to decry Chick-fil-A’s beloved mascot, the Cows that cannot spell. Piepenbring states that the Cows are “an ad in which one farm animal begs us to kill another in its place…[and] out of place in New York…Chick-fil-A, too, does not quite belong here.” In fact, according to “The New Yorker,” the opening of another store from one of the most popular fast food chains in the nation heralds something “worse than a load of manure on the F train.” Piepenbring is displeased with the expansion of fast food chains which he claims force mom and pop restaurants out of business, but he finds there to be something “especially distasteful about Chick-fil-A which has sought to portray itself as better than other fast food: cleaner, gentler and more ethical, with its poultry slightly healthier than the mystery meat of burgers.” This, however, sounds like exactly what made Chick-fil-A so popular in the first place. Why then, is it so “creepy” that a popular fast food chain is expanding? What is wrong with the fact that the chain that is rapidly becoming the third largest in the nation is owned by people who practice the most common faith in America? New York has always had Christians and Christian owned businesses. It has also long been home to fast food. Why is it suddenly a “creepy infiltration” that a beloved chain that happens to be owned by Christians is growing in New York City? After all, stores do not expand unless the customers are there to support the store. So, while Piepenbring may find Chick-fil-A’s presence unpleasant, clearly the average New Yorker does not since they are the ones buying enough chicken sandwiches to allow Chick-fil-A to continue growing.