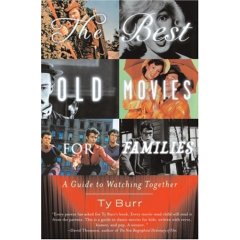 If you’re a parent with kids of film-viewing age, buy this book: “The Best Old Movies for Families: A Guide to Watching Together.”

This 375-page indexed guide by Boston Globe film critic Ty Burr is tremendously helpful–in fact, indispensable–to conscientious parents who struggle with when to let their youngsters watch what. Plus, underlying the book’s helpfulness is a perception of the parent’s role–as truth-teller, guru, interpreter–that I know will grab you as a ChatteringMind reader!

New movies today “arrive in theaters sold out, prepackaged, and co-opted,” Burr writes. They’ve become opportunities for product endorsements. Their characters are scrutinized for how “toyetic” they’ll be the following Christmas. Classic films like “The African Queen,” “The Thin Man,” or “North by Northwest” have a different morality; they introduce kids to film stars and directors whose messages weren’t selling product or dumbed down.

Burr watched the bulk of the old films he mentions with his two daughters, ages nine and eleven, and he splices their fabulous reactions into his write-ups. He also groups his endorsements by films appropriate for kids three to six, tweeners, and teens. In wonderful style, he explains why “The Adventures of Robin Hood” with Errol Flynn, and “Bringing Up Baby” with Katharine Hepburn and Cary Grant are good for your “starter kit.” He moves on to inform parents of tweens what’s significant about the UFO we-are-not-alone message of “The Day the Earth Stood Still,” and why the crossdressing in “Some Like It Hot” still works. He even helps you discern when’s the best time to introduce your teen to “Psycho” and “Rebel Without a Cause.”

Additional passages listing significant film directors and movie stars explain why Humphrey Bogart is someone you want your kids to “get” (he does not back down); why Shirley Temple withstands the tests of time (she’s as “steady and natural as a healthy pulse”), and how Marilyn Monroe’s vitality can be conveyed to children as a positive thing (instead of allowing them to dwell upon what they know of her death).

Some old films don’t add up to modern-day family enjoyment, and Burr writes with great wit about them too. “Gone With the Wind” is on his list of films that didn’t translate as well as he thought they would. “Why is she so silly?” asked daughter Natalie while watching slave girl Butterfly McQueen meander about without aim. Burr writes: “I could have said, well, because that’s how 1930s Hollywood portrayed black people with cutesy, derisive condescension…”

Every parent should keep Burr’s guide by the television, and every video store should plant one in house. We’re talking about hours of pleasurable movie viewing, and many, many significant full-family conversations afterwards. You’re going to thank me for this, I think.