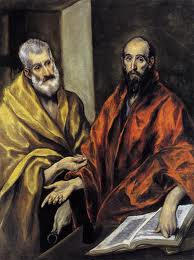 Since at least the Third Century, Christians have commemorated this day as a Solemnity, the day when the two pillars of the Church, the great Apostles, Peter and Paul, met the Lord whom they served with such beauty, face to face in the communion of eternal love. The Christian tradition celebrates the death of the saints, their dies natalis, as their day of birth to eternal life in Christ. To the early Christians death was viewed not as an end but as a “change of habitation.” So today, for Christians who truly believe, it is no longer an enemy but a friend.

June 29 marks the Feast of the Solemnity of the Apostles Peter and Paul in the Catholic Church calendar. These two great pillars of Christianity were both martyred for the faith. Their Feast is celebrated together. Priests and deacons throughout the entire world wear Red at the Liturgy, symbolizing that the blood of the Martyrs, as the Second Century Church Father Tertullian so clearly proclaimed, “is the seed of the Church.” Tuesday, June 30, we continue to wear Red as we commemorate the Martyrs of the First Church of Rome. The word “Martyr” derives from a Greek word which means “witness.” The Catholic Christian faith proclaims that the shedding of ones blood in fidelity to Jesus Christ is the final witness to the Faith.

From the day when Peter’s brother Andrew brought him to Jesus, and Jesus “looked at him” with those piercing eyes of Divine Love Incarnate (John 1:42), Peter was especially chosen. The early undivided Church acknowledged this fact and held his office in high esteem. From the day the persecutor of the Church, Saul, heard the Risen Jesus ask the question “Saul, Saul, why do you persecute me”(Acts 9:4), this former persecutor of the Way (Acts 22:4) became the Apostle to the Gentiles. In both encounters their names were changed, reflecting the interior truth of what occurs in every conversion and informs every vocation.These two men became, and still stand, as the pillars of the Church.

In the early Church, altars were built over the graves of the martyrs which the early Christians revered. They often became the place where the Eucharist was celebrated. The practice of reverencing the bones of the martyrs showed the respect with which the body was held by the early Christians and their absolute belief in the bodily resurrection, a tenet of the Christian faith which we profess in our Creeds and leads to our high regard for the body and understanding of the integrity of the human person, body, soul and spirit. 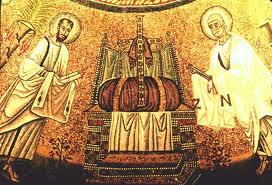 Last year, Pope Benedict XVI, while announcing the closing of a Year dedicated of St. Paul, made an amazing announcement. He disclosed the results of a scientific probe into the sarcophagus inside the Basilica of Saint Paul Outside the Walls. It is at this holy site that the faithful have for centuries venerated the bones of St. Paul.

In his homily, broadcast live on Italian television, the Pope told the faithful that the tomb had been “subject to a scientific investigation. A small hole was drilled in the sarcophagus, unopened for centuries, and a probe was introduced. It found traces of a valuable purple fabric, in linen and gold layer-laminated, and a blue fabric with linen threads. Red incense grains and substances containing proteins and limestone were also discovered.

“Small fragments of bone were found and radiocarbon dated by experts who did not know their place of origin. Results indicate that they belong to someone who lived between the 1st and 2nd century A.D. This seems to confirm the unanimous and undisputed tradition according to which these are the mortal remains of the Apostle Paul. All this fills our soul with deep emotion.”

The Apostle Paul suffered martyrdom at the hands of Roman authorities between 65 and 67 A.D. He was buried by the Christian faithful. About 250 years later the Emperor Constantine built a Basilica built over his tomb. Under the marble tombstone is a Latin inscription which reads “PAULO APOSTOLO MART” (Apostle Paul, Martyr).

The Pope urged Christians to imitate the courage of St. Paul in this critical hour in human history. He referred to the teachings of the Apostle in his many New Testament letters and reminded the faithful that “courage is needed to adhere to the Church’s faith, even if it contradicts the mould of today’s world. Paul calls this non-conformism a ‘grown-up faith’. For him following the prevailing winds and currents of the time is childish. For this reason dedicating oneself to the inviolability of life from its beginning, radically opposing the principle of violence, in the defense precisely of the most defenseless; recognizing the lifetime marriage between a man and a woman in accordance with the Creator’s order, re-established again by Christ is also part of a grown-up faith. A grown-up faith does not follow any current here and there. It is against the winds of fashion.”

The results of the scientific study verifying the bone fragments as those of the Apostle Paul coincided with some other news last year as well. Vatican archaeologists discovered the oldest image of St Paul ever found. It was discovered on the walls of the catacombs beneath Rome and was dated to be from the late 4th century. The Vatican newspaper, L’Osservatore Romano, published the image. It revealed the face of a man with a pointed black beard on a red background inside a bright yellow halo. The Pontifical Commission for Sacred Archaeology found the Icon on June 19, 2010 in the Catacomb of Santa Tecla in Rome.

Pope Benedict XVI has set the Catholic Church on a path of deepening conversion, continually challenging all who bear the name Christian to live fully the Christian faith in an age which has succumbed to what he has called a “Dictatorship of Relativism.” It is obvious in this Pope’s writings, messages and example that he understands the urgency of the hour and believes that only the Church can bring about the change needed to transform the current “culture of death” into a new “culture of life” and “civilization of love.”

On this great Feast we need to rededicate ourselves to being true witnesses, with an adult faith, willing to participate fully in this new missionary age of the Catholic Church. May the blood of the Martyrs continue to be the seed of the Church. St. Peter and St. Paul, pray for us!