Catholics, Advent, John the Baptizer and the Way to Happiness and Freedom 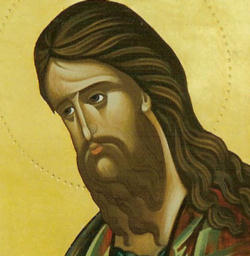 This Sunday Catholic Christians we will be introduced to one of the two main personalities of the liturgical season of Advent. John the Baptizer. The other is Mary, the Mother of the Lord. As a Deacon of the Church I will proclaim the Gospel at the Liturgy. Our Gospel text will be taken from Matthew, Chapter 3. Included are these words of the Baptizer, “I am baptizing you with water, for repentance, but the one who is coming after me is mightier than I. I am not worthy to carry his sandals. He will baptize you with the Holy Spirit and fire.”

Our image of John is as the austere ascetic, the odd fellow who lived in the desert eating a strange diet and thundering to Israel about repentance. We forget the joy that was associated with his birth and the happiness which accompanied his prophetic life and vocation. Because He focused on Jesus, he experienced true freedom and happiness.  He is held out to us as an example in Advent to show us the how we can as well.  John said “yes” – to who he was and who he was called to become. In that he is an example for each one of us to reflect on during this season.

When Our Lady went to visit her kinswoman Elizabeth – she carrying the Incarnate Word, Jesus,and Elizabeth carrying John – the Gospel tells us: “When Elizabeth heard Mary’s greeting, the infant leaped in her womb, and Elizabeth, filled with the Holy Spirit, cried out in a loud voice and said:”Most blessed are you among women, and blessed is the fruit of your womb. And how does this happen to me that the mother of my Lord should come to me? For at the moment the sound of your greeting reached my ears, the infant in my womb leaped for joy. Blessed are you who believed that what was spoken to you by the Lord would be fulfilled.” And Mary said: “My soul proclaims the greatness of the Lord; my spirit rejoices in God my savior.” (Luke 1: 41-47)

Living in his mother’s womb, this last Prophet of the Old Testament and First Prophet of the New responded to the arrival of Jesus the Savior with a dance of Joy. St. John records John the Baptizer explaining the reason for his joy, “The one who has the bride is the bridegroom; the best man, who stands and listens for him, rejoices greatly at the bridegroom’s voice. So this joy of mine has been made complete. He must increase; I must decrease.” (John 1:29 – 30) He was a man of Joy because he was a man of true humility!

John understood that life wasn’t all about him. He emptied himself willingly. His humility opened a space within him for true joy to take root and set him free! John is a sign of contradiction for an age drunk on self worship and lost in narcissistic self absorption. He points to the path of true freedom, living a lifestyle of self emptying.” He must increase and I must decrease”. This is the attitude, the disposition, the way of life which can lead each of us into to true freedom. This is the path to becoming the new creation we are called to become by living “in Christ”. (2 Cor. 5:17)

John is a man to be imitated. We can learn from him how to live our lives as joyful penitents; ever aware of our utter dependency on God’s grace at every moment. It is sin which leads us into slavery and takes away our joy. Only by being freed from its entanglements can we become truly happy and free. (See, Romans 6: 6, 7 and Gal. 5:1)  John points to Jesus in his birth, his life and his martyr’s death.

We do not hear enough of a fundamental truth of the Christian faith; the Lord desires our human flourishing and happiness. He wants us to be free. The Apostle Paul proclaimed to the Galatians “It was for freedom that Christ set us free” (Gal 5:1) The Lord Jesus invites us to choose Him over our own selfish pursuits and to find that happiness and freedom which we desire. In a very real sense, sin fractured our freedom and it is the wood of the Cross which becomes the splint which restores it.

Catholic theology speaks of receiving the “beatific vision” when we finally stand in His presence and enter into the fullness of communion.  The word “beatitude” means happiness! Living in the Lord will make us happy; not only in the life to come, but beginning now. Too often we associate repentance with some kind of wrong- headed self hatred. To the contrary, for those who have been schooled in its lessons like John the Baptizer, the way of voluntary penitence and conversion becomes the path to freedom and happiness.

The Venerable John Paul II wrote frequently about human freedom. In one of his letters of instruction on the Christian family he wrote these insightful words: “History is not simply a fixed progression toward what is better – but rather, an event of freedom. Specifically, it is a struggle between freedoms that are in mutual conflict: a conflict between two loves – the love of God to the point of disregarding self and the love of self to the point of disregarding God (John Paul II, Christian Family in theModern World, n. 6)”

This “conflict between two loves”, this “event of freedom”, is played out on a daily basis for each one of us. The recurring questions of Eden echo in our personal histories. How will we exercise our “freedom”? At which tree will we make “our” choices? Will it be the tree of disobedience, where the first Adam chose against God’s invitation to a communion of love, or the tree on Golgotha’s hill where the second Adam, the Son of God, brought heaven to earth when He stretched out His arms to embrace all men and women, bearing the consequences of all their wrong choices and setting them free from the law of sin and death? (Romans 8:2)

Let me conclude with some words concerning true freedom from the Catechism of the Catholic Church: “Freedom is the power, rooted in reason and will, to act or not to act, to do this or that, and so to perform deliberate actions on one’s own responsibility. By free will one shapes one’s own life. Human freedom is a force for growth and maturity in truth and goodness; it attains its perfection when directed toward God, our beatitude.

“As long as freedom has not bound itself definitively to its ultimate good which is God, there is the possibility of choosing between good and evil, and thus of growing in perfection or of failing and sinning. This freedom characterizes properly human acts. It is the basis of praise or blame, merit or reproach. The more one does what is good, the freer one becomes. There is no true freedom except in the service of what is good and just. The choice to disobey and do evil is an abuse of freedom and leads to “the slavery of sin.” (CCC 1731 – 1733).

The choice for true freedom is ours. It has to be made over and over again. John the Baptizer shows us the way to Happiness and Freedom. Let us follow his example during our Advent of preparation and point the way to others. That Way is Jesus Christ, the Way, the Truth and the Life.

Why Do Catholics Celebrate Advent? The Call to Begin Again
archives most recent
More from Beliefnet and our partners
previous posts