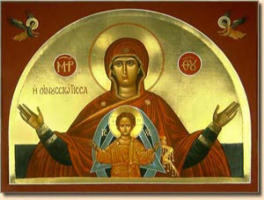 “In the sixth month the angel Gabriel was sent from God to a city of Galilee named Nazareth, to a virgin betrothed to a man whose name was Joseph, of the house of David; and the virgin’s name was Mary. And he came to her and said, “Hail, full of grace, the Lord is with you” (Lk 1:28).

These angelic words of greeting recorded in this biblical passage form the opening words of one of the most cherished prayers in Catholic piety referred to as the “Hail Mary.” In the years that I have served as a Deacon of the Church I have found that these words – and the prayer that they intone – are a source of great comfort especially when people are ill, in trouble, or facing death. They bring tremendous comfort to many.

Sacred Scripture tells us that Mary was “full of grace”, filled with the very life and presence of God. She walked in a deep, abiding and intimate relationship with God. He was with her before she even responded to His invitation. God chose Mary even before Mary chose God. This order is vitally important if we want to grasp the deeper meaning of living the spiritual life.

We sometimes think that we brought God into our lives. This is hinted at in the use of popular language that, even if well intended, can lead us to believe that we do the initiating and somehow control the relationship. In fact, nothing could be further from the truth. Jesus made this clear in His words to His disciples “You did not choose me, I chose you” (St. John 15:16). Sometimes, in our religious subcultures, we actually end up communicating the opposite.

I was raised in a sacramental tradition as a Catholic Christian. My family practiced the faith until a tragedy shook our foundations. Afterward, we remained cultural – but not always practicing – Catholics. This occurred just as I began my turbulent teenage years. Later on, when I returned to the practice of my faith, I felt as if I had “come home”. I thought that I had “found” the Lord. In a sense, that was true. However, I would soon come to discover that He had never left me; it was I who had wandered away. It took a while to understand what that meant as His grace unfolded in my daily life.

During that time I discovered a prayer of the great western Church father, Augustine, which he uttered upon his own return to the faith and recorded in his wonderful “Confessions”:

“Late have I loved you, O Beauty ever ancient, ever new, late have I loved you! You were within me, but I was outside, and it was there that I searched for you. In my unloveliness I plunged into the lovely things which you created. You were with me, but I was not with you. Created things kept me from you; yet if they had not been in you they would have not been at all. You called, you shouted, and you broke through my deafness. You flashed, you shone, and you dispelled my blindness. You breathed your fragrance on me; I drew in breath and now I pant for you. I have tasted you, now I hunger and thirst for more. You touched me, and I burned for your peace.”

St. Augustine understood, like Mary and countless men and women throughout the ages, that it is the Lord who reaches out to us in His love. It is the Lord who offers His grace. We are the recipients of that grace, and He fills us according to the capacity that He has built within us. The proper order of initiation and response has profound relevance for us if we truly desire to live the spiritual life. God is already there. He awaits our response to His relentless love and grace, which are both within and all around us.

We can learn this and so many more things from the Biblical visitation of Mary by the angel or “messenger” of God. Her experience with Gabriel offers other important lessons for our own daily lives. Let’s look at a few.

First of all, the story is time specific. The angel came in the sixth month. Angels still come at the specific moment that God chooses to intervene in our lives. The One who sends them does not wear a watch, keep a day-timer, or use a pocket computer. He is outside of time but always on time. He is never early. And He is never late.

The angel came to a specific person, “a virgin betrothed to a man whose name was Joseph.” Angels appear to specific people in the real circumstances of their daily lives, in the midst of their human relationships. The older I get, the more I am able to recognize the “angels,” or messengers, the Lord sends into my life. They come bearing His message, speaking to my specific circumstances at a specific time of need. The angelic greeting also tells us about our invitation into a relationship with God.

Gabriel’s greeting was specific. Mary was addressed by her Hebrew name, implying that the God from whom the angel was sent knew Mary personally and had a relationship with her that preceded the visitation. So it is with each one of us. As the Great Hebrew Psalmist David sang, “You formed my inmost being; you knit me in my mother’s womb. I praise you, so wonderfully you made me; wonderful are your works! My very self you knew; my bones were not hidden from you, when I was being made in secret, fashioned as in the depths of the earth. Your eyes foresaw my actions; in your book all are written down; my days were shaped, before one came to be (Psalm 139).

The angel refers to Mary as “O highly favored one” or, in other translations, “full of grace.” Mary was indeed favored and full of grace. The Lord of heaven and earth had prepared and chosen her as a fertile ground into which he planted the seed of His Word. Angels still visit those who believe that grace is real and available, the favor and blessing of God. They come, bearing God’s message to men and women are humble enough to open themselves to its dynamic, sanctifying and transforming action. In a real and substantial way, when we respond to the words of the Lord, we also become filled with grace – and He is formed within us. In that sense, we become favored. An early father of the undivided Christian Church, Gregory of Nyssa, once wrote:

“What came about in bodily form in Mary, the fullness of the godhead shining through Christ in the Blessed Virgin, takes place in a similar way in every soul that has been made pure. The Lord does not come in bodily form, for ‘we no longer know Christ according to the flesh’, but He dwells in us spiritually and the father takes up His abode with Him, the Gospel tells us. In this way the child Jesus is born in each of us”

Perhaps the reason the scriptures tell us so little about Mary was because she was meant to serve as a mirror, a reflection, of “Some- One” who was much more important. It was His grace that filled her. God brings new life to ordinary people who have eyes to see, ears to hear, and pure hearts that are opened to his invitation of love. Like Mary, they become full of grace through their encounter with the Lord.

A profound mystery is made wonderfully simple by Mary of Nazareth’s witness. She lived a fruitful life, marked by an innocent and childlike spirit. As Jesus said, “I thank you Father, Lord of heaven and earth that what you have hidden from the learned and the wise you have revealed to the merest of children” (Luke 10:21). His words help us understand that we, too, are to become “as little children.”

Each of us is now called to become full of grace. The Lord desires to be with us, to live within us in a world that hungers for His love–a love which can be borne in us and offered through us to others. Mary shows us the way. She heard the promise, believed, was filled with grace, and conceived the Lord who is Love incarnate. We can do likewise if we learn to pray, to listen, to hear, to respond, to say “Yes”.

In doing so we, like Mary, will discover that “nothing is impossible with God.” The Invitation Continues.

Catholics, Advent, John the Baptizer and the Way to Happiness and Freedom
archives most recent
More from Beliefnet and our partners
previous posts