From The Catecheses of St Cyril of Jerusalem, an early fourth century Bishop and Doctor of the undivided Church: 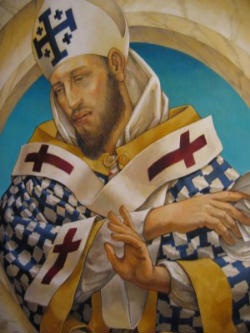 “The Church is called ‘Catholic’: such is the proper name of the holy Church which is the mother of us all. She is also the bride of our Lord Jesus Christ, the only-begotten Son of God (for it is written in the scripture, ‘Christ loved the Church and gave himself up for her,’ and so on). Moreover she fulfils the type and carries out the pattern of the Jerusalem which is from above, which is free and the mother of us all. Though she was at first childless, she is now the parent of a mighty family.

“After the former Church had been rejected, in the second, that is, the Catholic Church, God has appointed, as Paul says, first apostles, second prophets, third teachers, then workers of miracles, then healers, helpers, administrators, speakers in various kinds of tongues and every type of virtue: I mean wisdom and intelligence, self-control and justice, mercy and humanity, and invincible endurance in persecution.

“However, by the armour of righteousness on the right hand and on the left, through honour and dishonour, first in persecutions and distress she wreathed her sacred martyrs with crowns of endurance interwoven with manifold and varied flowers; now in times of peace, she receives by the grace of God due honour from kings and men of rank, in a word from every sort and kind of person. And though the kings of nations spread round the world have limits to their sovereignty, it is the holy Catholic Church alone which in the whole earth rejoices in unlimited sovereignty; as it is written, God ‘has appointed peace as his boundary.’


“In this holy Catholic Church, formed by its teaching and living as we ought, we shall possess the kingdom of heaven and inherit eternal life. For the sake of this we endure everything, that we may gain that life from the Lord. We have no modest aim, but the gaining of eternal life; that is the object of our striving.

“For this reason we are taught in the Creed that after ‘And in the resurrection of the flesh’ that is, of the dead, which we have already discussed, we affirm our belief ‘in life everlasting’. This is the object of our efforts as Christians.”

Therefore, the Father is life really and truly. Through the Son he pours forth upon all in the Holy Spirit the gifts of heaven as from a fountain, and in his kindness to us men he has promised truly to each the good gift of eternal life.

St Ambrose: God's temple is holy, and you are his temple
archives most recent
More from Beliefnet and our partners
previous posts