Peering Into The Beyond 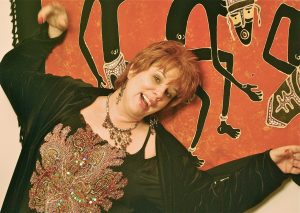 Yesterday a group of family, friends, and strangers to each other gathered in the sanctuary of an Episcopal church in New Jersey to bid farewell to someone dear to us. By the time the service was complete and we meandered into the social hall to share food and stories, we had become family of chance. My friend Ondreah passed just before 1 a.m. on Sunday, December 9th, 2018. She had been engaged in a two-year encounter with a disease that is taking the lives of women at a distressing rate: Triple Negative Breast Cancer. I accompanied her on her journey, going to some appointments, talking daily, creating outings, activities, and projects to lift her spirits. In the last few months of her life, I stayed over as able and was blessed to be one of those who ushered her to the threshold in her final moments. Once she passed, I assisted her family in emptying her house of its objects, ‘adopting’ some of them so it feels like her energy is even more present. As a minister, I co-officiated her service with her family’s minister from her childhood church. It was a blend of Christian and Sufi prayers since the first was the early foundation of her spiritual practice and the second, her choice as she found great comfort in it.

People have been thanking me for being there for her. Truth is, I’m no hero. She would have done the same for me. I am still in surrealistic, numb mode with a few episodes of tears breaking through. Not sure where this journey will take me as I move forward without one of my dearest peeps in body.

I share here what came through to honor her.

Tom Robbins, author of one of my favorite books, Jitterbug Perfume—which I have come to see as a tribute to life, death, and the Beyond—offers:

“At birth, we emerge from dream soup.
At death, we sink back into dream soup.
In between soups, there is a crossing of dry land.
Life is a portage.”

As I think about Ondreah, I imagine she is immersed in dream soup and love soup. Looking around this room, I know that those gathered have added ingredients to that concoction. We each have our memories of her, that I ask you to hold in your hearts and perhaps share them with each other after the service.

I’m going to paint a picture here of my friend.

We met somewhere around 2006, by what I call the Hansel and Gretel Breadcrumb trail that had a friend in my area introduce me to a friend in Texas who came here to teach. At the weekend were women who introduced me to friends in the MD/DC area (some are here today) and we became part of an online group. Both Ondreah and I bemoaned that everyone was so far away. Someone chimed in that she and I actually lived near each other. And so began a friendship that evolved into more of a sister relationship. She was a traveling companion as we drove southward often to visit our tribe. We used to bust on each other for our driving habits. She told me I drove like an old lady and I called her Mario Ondreah, pedal to the metal. We always got where we were going safely. We were each other’s kvetch and moan friends, unloading angst rather than holding on to it. She had the capacity to hold space while people talked about what was on their minds and in their hearts. She also didn’t hold back sharing her opinions, but always with love and humor as the guiding force.

Ondreah was always up for an adventure and exploring new horizons. Her spiritual path was meandering, rich and fulfilling. Her deep dive into Heart Rhythm Meditation sustained her as she faced her most daunting challenge, one which brings us all together today. When she was diagnosed with Breast CA after finding a lump on Christmas Day two years ago, she faced it with determination. Reframing the experience, she called it being on the C train where she moved from one car to the next. She called treatment IV meds and toted along with her various accouterment such as music (some of which you heard coming in), her prayer beads, books and pictures of the lineage of her spiritual teachers. They brought her comfort and educated the treatment team. She wanted them to know what it was like to be on the other end of the stethoscope. Someday every medical professional as she was will become a patient. When her hair began to shed, she decided to have a ritual in which her head was shaved by a dear friend hairdresser named Jac. A few weeks later, she had a henna design created on her bald head.

She reveled in dressing up even more colorfully. At that time, I don’t think she contemplated this outcome. None of us did.
As it became clear that the train ride would be ending, she healed relationships, asked for what she needed, since she was oh so good at giving, and was willing to receive. Friends and family stepped up and were the nourishment that sustained her as long as it could.

In conversation with her a few weeks before she died, she described the experience as internal, and the sense I got was that it felt like she was folding in on herself like a burrito. What if the inside is filled with experience and emotion and memory and when we are close to death, we get to explore it, since we are not so busy with the day to day stuff of life? At the moment when we cross over to whatever awaits us, does the burrito unroll to reveal what lies within?

On her last night, in hospice, a few friends, her brother and sister and I gathered around her bed, offering comfort, energy work, nurturing touch, music, and prayers for her easy transition. Toward the end, as we could see her drifting off, we asked her to surrender. That she did.

I am convinced that when we are close to the threshold, our Spirit, that vitalizing force gets so vast that the body can’t contain it and so it bursts free of its constraints. The body shrinks back. I saw that happen with Ondreah.

Whenever we would leave each other’s company, we would say to the other, call or text when you get home. Although I will miss hearing her voice or seeing the words, I know for certain that she arrived Home safely. Let’s take a moment to place our hands on our hearts and send out a blessing to Ondreah as she settles into her new life. We love you.

She, along with others in my life who have passed, have offered me a glimpse into the Beyond.